Turkey to send troops to Libya on the country’s request

Ankara and Tripoli’s GNA signed two separate agreements, one on military cooperation and the other on maritime boundaries of countries in the Eastern Mediterranean.

Turkey will send troops to Libya at the request of Tripoli as soon as next month, President Tayyip Erdogan said on Thursday, putting the North African country’s conflict at the center of wider regional frictions.

"WE WILL ACCEPT LIBYA'S INVITATION"

Last month, Turkey signed two separate accords with the GNA, led by Fayez al-Serraj, one on security and military cooperation and another on maritime boundaries in the eastern Mediterranean.

The maritime deal ends Turkey’s isolation in the East Mediterranean as it ramps up offshore energy exploration that has alarmed Greece and some other neighbors. The military deal would preserve its lone ally in the region, Tripoli. 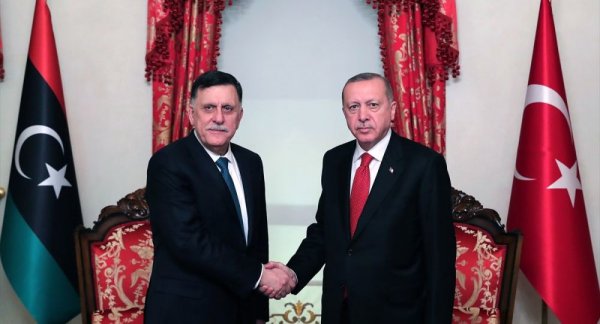 “Since there is an invitation (from Libya) right now, we will accept it,” President Erdoğan told members of his AK Party in a speech. “We will put the bill on sending troops to Libya on the agenda as soon as parliament opens.”

The legislation would pass around Jan. 8-9, he said, opening the door to deployment.