The US was only supposed to be in Syria for 30 days but stayed and got deeper and deeper into battle with no aim in sight, Trump said on Twitter.

US President Donald Trump on Monday defended his administration’s decision to withdraw US troops from northern Syria, saying it was too costly to keep supporting U.S-allied YPG terror forces in the region fighting Daesh.

"I HELD OFF THIS FIGHT FOR ALMOST 3 YEARS"

"The United States was supposed to be in Syria for 30 days, that was many years ago. We stayed and got deeper and deeper into battle with no aim in sight," Trump said in a series of tweets. 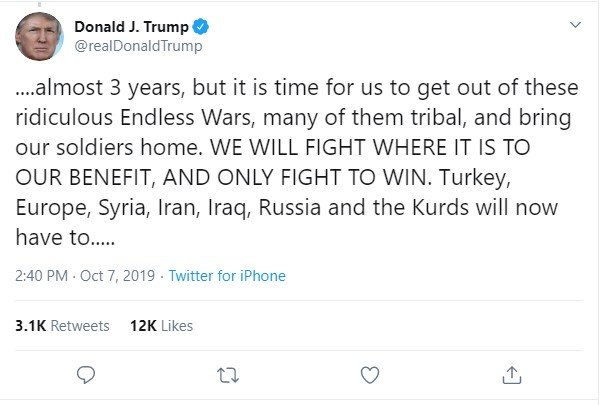 "The Kurds fought with us, but were paid massive amounts of money and equipment to do so. They have been fighting Turkey for decades," he added.