Trump threatens NYT, is sure he will be reelected for a second term

Trump accused the New York Times newspaper of making fake news and threatened to finish it off ‘till the end of his presidentship.

US President Donald Trump on Monday rejected a New York Times report that raised questions about multiple Deutsche Bank transactions involving entities controlled by him and his son-in-law Jared Kushner.

"YOU WILL PASS AWAY IN 6 YEARS"

Trump denied the allegations in early morning tweets, saying he had so much money as a businessman that he did not need banks. He also denied that any of his cash came from Russia.

He also implied that he will be reelected for a second time. 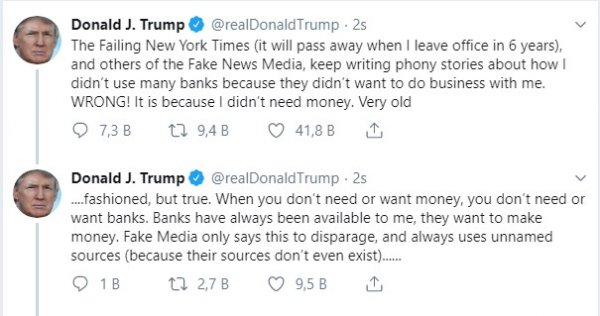