With Netanyahu looking over his shoulder at the White House, Trump signed a proclamation officially granting US recognition of the Golan as Israeli territory.

The move, which Trump announced in a tweet last Thursday, appeared to be the most overt gesture by the Republican president to help Netanyahu, who had been pressing Trump for the move since February 2017.

The international community has condemned the unilateral and illegal action by the US administration on Monday to formally recognize Israel’s sovereignty over occupied Golan Heights. 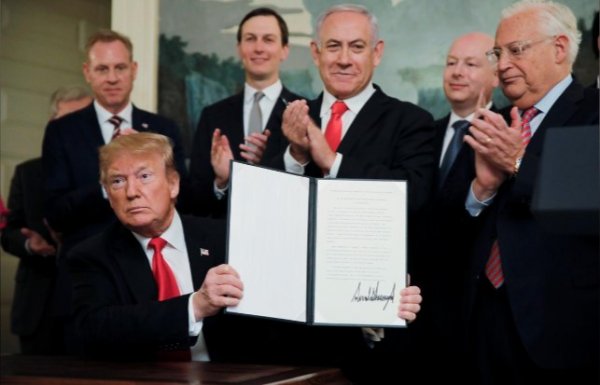 EU, UN, others slam unilateral action taken by US to formally recognize Israel’s sovereignty over Golan Heights. "The status of Golan has not changed. The UN’s policy on Golan is reflected in the relevant resolutions of the Security Council." the UN said. EU reiterated its stance against recognizing Israeli sovereignty over territories including Golan Heights, occupied since 1967. 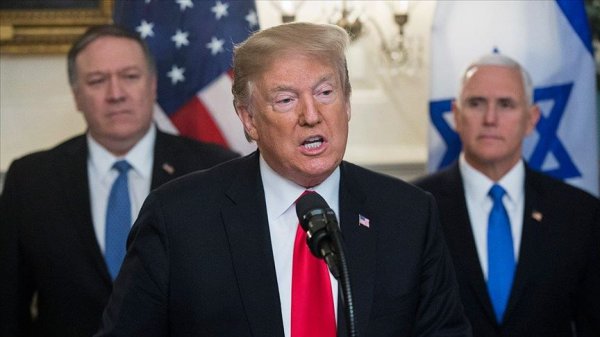 The UK also reiterated its recognition of Golan Heights as "territory occupied by Israel". "We did not recognize Israel’s annexation in 1981 and have no plans to change our position,” the Foreign Office said.

Israel has long lobbied the US to recognize its claim over the Golan Heights, but all past administration refused to heed the calls.

Israel occupies roughly two-thirds of the wider Golan Heights as a de facto result of the conflict. It moved to formally annex the territory in 1981 -- an action unanimously rejected at the time by the UN Security Council.