The treaty has been in effect since late 2014. The US signed on to the agreement in 2013 but has not ratified the treaty.

President Donald Trump withdrew the US on Friday out of another treaty aimed at curtailing the global proliferation of weapons.

THE WITHDRAWAL HAD BEEN EXPECTED

Trump told a gathering of the pro-gun rights National Rifle Association his administration "will never surrender American sovereignty to anyone," pointing to the Arms Trade Treaty. "We will never allow foreign bureaucrats to trample on your Second Amendment freedoms. And that is why my Administration will never ratify the UN Arms Trade Treaty," Trump said, referring to the article of the Constitution that guarantees Americans' right to bear arms. 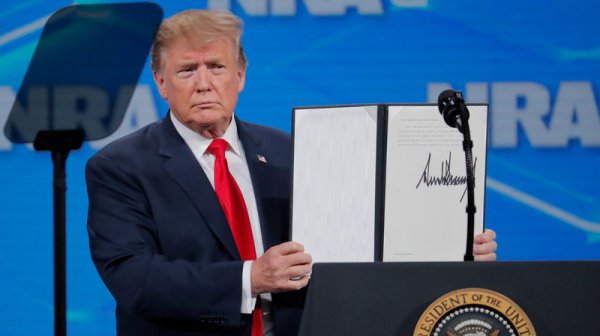 Trump signed on stage a message to the Senate asking it to stop the ratification process and return the treaty to him so he can "dispose" of it. "By taking these actions we are reaffirming that American liberty is sacred, that American citizens live by American laws, not the laws of foreign countries," Trump said.

Critics of the agreement have argued it could threaten US sovereignty.