Donald Trump said he will strongly consider testifying before Congress in writing as part of the impeachment inquiry.

Trump said on Twitter that he would “strongly consider” House of Representatives Speaker Nancy Pelosi’s suggestion that he testify in the House impeachment inquiry into whether he pressured Ukraine to investigate domestic political opponent Joe Biden.

"I STRONGLY CONSIDER IT"

“Even though I did nothing wrong, and don’t like giving credibility to this No Due Process Hoax, I like the idea & will, in order to get Congress focused again, strongly consider it!” Trump wrote. 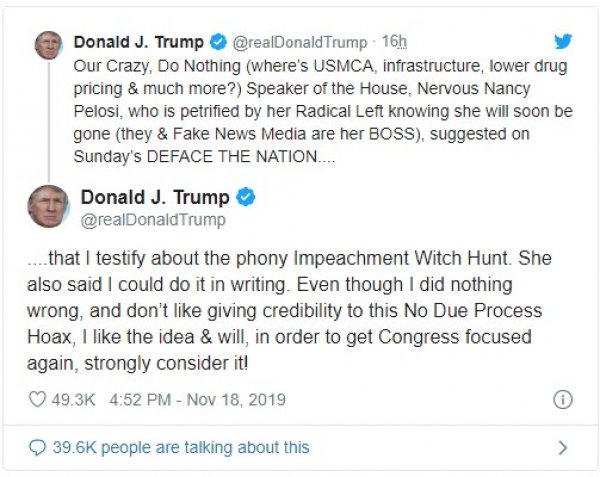 Trump has come under increasing pressure as public hearings have started in the impeachment probe, and the Democratic-led committees conducting the investigation have released transcripts of interviews conducted in closed sessions that contain potentially damaging allegations against him.