Dozens of protesters broke into the US embassy in the Iraqi capital Baghdad on Tuesday.

The US ambassador to Iraq and other staff were evacuated from their embassy in Baghdad for their safety on Tuesday, Iraqi officials said, as thousands of protesters and militia fighters thronged the gates in fury at US air strikes in Iraq.

US SOLDIERS STUCK IN THE EMBASSY

The two Iraqi foreign ministry officials did not say when the US ambassador or other staff had left but added that a few embassy protection staff remained. 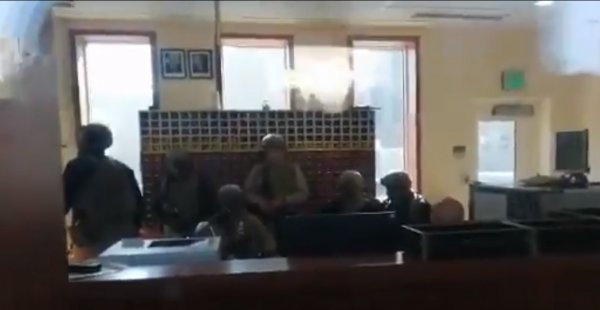 Iraqi special forces were deployed around the main gate to prevent them entering the embassy. US-trained and -equipped Iraqi Counter Terrorism forces were later dispatched to reinforce these units.

US forces waiting in the embassy WATCH

Inside the embassy, Kataib Hezbollah militias came face to face with US soldiers that tried to protect themselves behind the glass-covered rooms.

US President Donald Trump said early on Tuesday that Iran was “orchestrating” an attack on the US embassy in Iraq and will be held responsible for it.

“Iran killed an American contractor, wounding many. We strongly responded, and always will. Now Iran is orchestrating an attack on the U.S. Embassy in Iraq. They will be held fully responsible. In addition, we expect Iraq to use its forces to protect the Embassy, and so notified”, he said in a tweet.