At least 26 people were killed and a further 56 injured in Friday's terror attack at a hotel in Kismayo, Somalia.

At least 26 people were killed and more than 50 wounded after a suicide bomb attack targeted a popular hotel in Somalia’s southern coastal city of Kismayo, officials said on Saturday.

A gun battle between security forces and members of the al-Qaeda affiliated al-Shabaab group broke out after the blast on Friday evening.

Jubaland state President Ahmed Mohamed Islam, also known as Ahmed Madobe, said one UK, one Canadian, three Kenyan, three Tanzanian and two US nationals were among those killed in the attack. 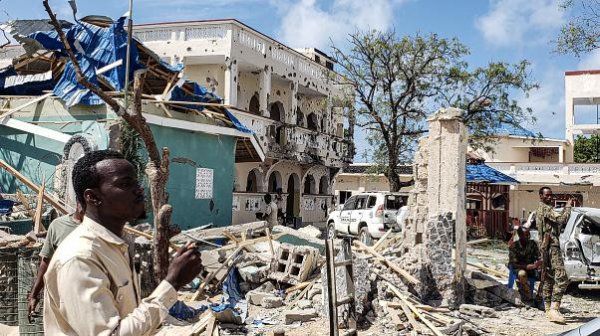 The Somali-based group al-Shabaab claimed responsibility for the deadly attack, saying its fighters killed government officials in the attack.

Kismayo is an strategic port city located about 500 kilometers (310 miles) south of the Somali capital Mogadishu. It is the first kind of attack in Kismayo since Somali government and Amisom forces took the city from al-Shabaab in 2012.

Turkey on Saturday "strongly" condemned the terror attacks. "We wish Allah’s mercy upon those who lost their lives, a speedy recovery to the wounded and convey our condolences to the friendly and brotherly Government and people of Somalia," the Turkish Foreign Ministry said in a statement.