"ALSO REVIEWED THE LATEST DEVELOPMENTS IN THE LIBYAN ARENA"

The king received Haftar at Riyadh’s Al-Yamamah Royal Palace, SPA reported without stating the purpose of his visitor its expected duration. At the meeting, the king “affirmed Saudi Arabia’s desire to promote Libya’s security and stability and its wish to see the Libyan people enjoy progress and prosperity,” according to a royal statement cited by SPA. The two men “also reviewed the latest developments in the Libyan arena,” the news agency added without providing further detail. 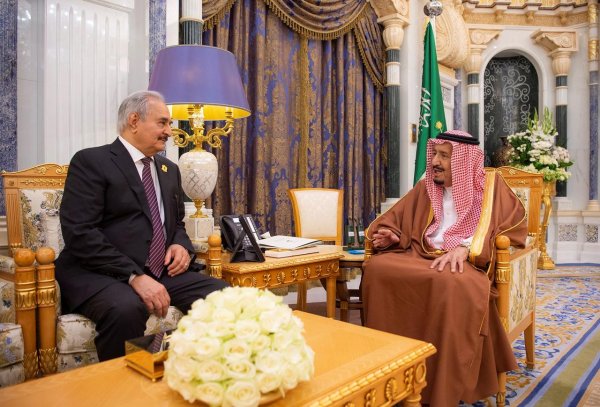 It was the first time for Haftar, who is affiliated with Libya’s Al-Bayda based government, to be received by the king in Riyadh.

Libya has been beset by turmoil since 2011 when a bloody NATO-backed uprising led to the ouster and death of President Muammar Gaddafi after four decades in power. Since then, Libya’s stark political divisions have yielded two rival seats of power one in the eastern city of Al-Bayda and another in capital Tripoli and a host of militia groups.