Protesters set US Baghdad embassy fire over US airstrikes

US forces carried out airstrikes on Sunday against the Kataib Hezbollah militia in response to the killing of a US civilian contractor in a rocket attack on an Iraqi military base.

Thousands of protesters and militia fighters gathered on Tuesday outside the main gate of the U.S. embassy compound in Baghdad to condemn air strikes on bases belonging to an Iranian-backed militia in Iraq.

"NO AMERICA, NO TRUMP"

The strikes risk drawing Iraq further into a proxy conflict between the United States and Iran at a time when it is being rocked by mass protests against the political system.

Protesters set US Baghdad embassy fire over US airstrikes WATCH

Some protesters threw stones at the gate while others chanted, “No, no, America! ... No, no, Trump!” Iraqi special forces were deployed around the main gate to prevent them entering the embassy.

Qais al-Khazali, leader of the Iranian-backed Asaib Ahl al-Haq militia, and many other senior militia leaders were among the protesters. Kataib Hezbollah flags were hung on the fence surrounding the building. 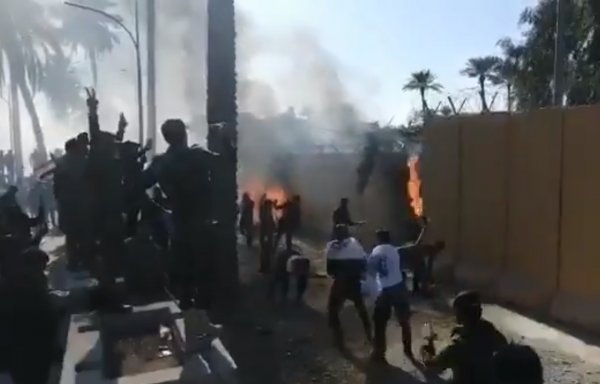 Iraqis are taking to the streets in their thousands almost daily to condemn, among other things, militias such as Kataib Hezbollah and their Iranian patrons that support Iraqi Prime Minister Adel Abdul Mahdi’s government.

Abdul Mahdi condemned the strikes, which killed at least 25 fighters and wounded 55.