Performers stabbed during a live show in Saudi Arabia

A man stabbed three performers at a live show in Saudi Arabia’s capital and was arrested, state television reported on Monday, adding that the victims were in stable condition.

ATTACKER WAS REPORTED A YEMENI CITIZEN

The incident occurred at King Abdullah Park in central Riyadh, one of several venues hosting a two-month long entertainment festival as part of government efforts to open up Saudi society and diversify its economy away from oil. 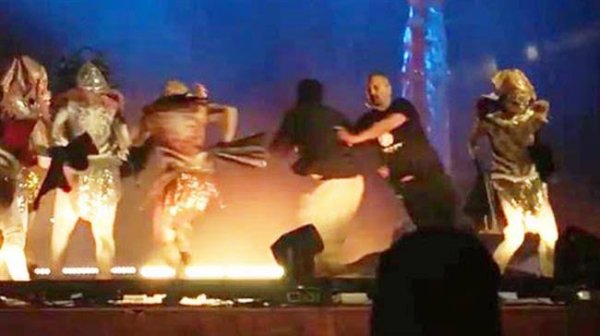 The motivation for the attack was not immediately clear. Saudi Arabia intervened in Yemen’s civil war in 2015 against the Iran-aligned Houthis. SPA said the victims, two men and a woman, sustained “superficial wounds” and were stabilized after receiving medical care.

Performers stabbed during a live show in Saudi Arabia WATCH

A video tweeted by state television Al Ekhbariya appeared to show a man in street clothes rushing the stage towards a group of costumed performers and then falling to the ground as someone else chased him.

Another online video showed the scene from another angle, as the assailant tumbled off the stage and the performers fled.