Netanyahu had to abandon the stage during a Likud party campaign following the sounding of sirens in the region.

Netanyahu has announced he will annex the of the Palestinian territories occupied by Israel if he is re-elected.

HE WAS QUICKLY WHISKED AWAY

During his statement, Netanyahu was whisked off stage and taken to a shelter as an election rally in the southern Israeli city of Ashdod was interrupted by sirens signalling possible rocket fire from Gaza.

Netanyahu appeared scared by the sirens.

According to the Israel Defense Forces, two rockets were intercepted by the Iron Dome system.

Netanyahu was unhurt and several minutes later he was able to continue his speech, which was broadcast live on social media by his right-wing Likud party. 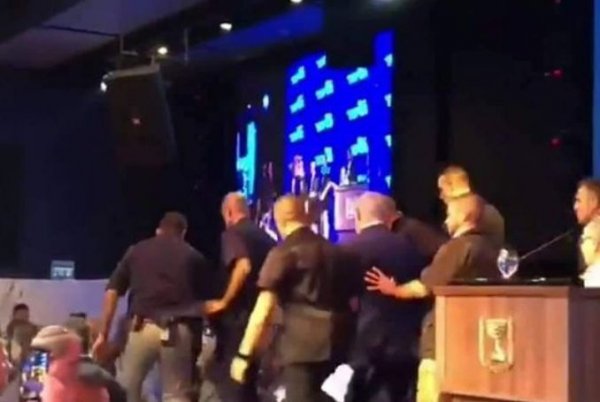 However, the spectacle of the prime minister being forced off the podium, with an election just a week away, added fuel to accusations by political opponents that he has not done enough to halt frequent cross-border rocket strikes against southern Israel.