Iraq's parliament holds a conference for neighboring countries in Baghdad on Saturday to discuss security and economic issues.

Iraq is committed to maintaining balanced bilateral relations with Turkey and other neighboring countries in the region, the Iraqi parliament speaker said Saturday.

"WE HAVE VERY GOOD RELATIONS WITH TURKEY"

“We have very good relations and promising economic projects with Turkey,” Mohammed al-Halbusi said in a speech to a Baghdad summit of parliament heads of neighboring countries. 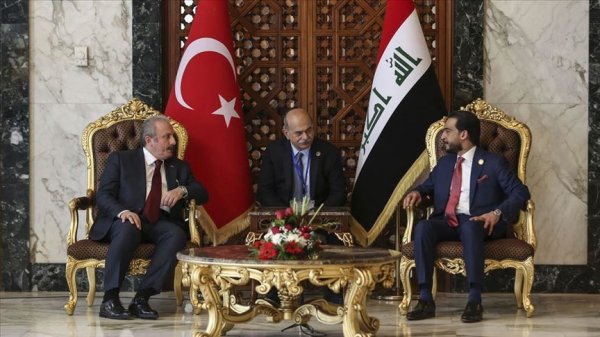 The one-day summit brings together the parliament heads of Iraq, Turkey, Saudi Arabia, Kuwait, Jordan and Syria as well as a representative from Iran.

Al-Halbusi said Iraq has managed to terminate the presence of terrorist group from the country. “Iraq began to take its place in the region,” he said. As for Iraq’s adoption of open policies toward its neighbors, the Iraqi speaker said “Iraq followed an opening policy towards neighboring countries in order to prevent the return of radical ideas and terror.” “Iraq has balanced relations with Kuwait, Jordan, Iran and Saudi Arabia along with Turkey, and it has signed bilateral agreements with these countries too,” he said.