Hundreds of protesters in Hong Kong have surrounded police headquarters, calling for an extradition bill to be scrapped.

As part of a fresh wave of protests against a contentious extradition bill in Hong Kong, demonstrators surrounded the police headquarter early Friday demanding complete withdrawal of the bill.

HUNDREDS OF PEOPLE TAKE TO THE STREET

Hundreds of protesters took to the streets around police building and set up barriers to block roads, according to a report by the South China Morning Post.

Hong Kong has been observing massive mass rallies since earlier this month when the local government led by Chief Executive Carrie Lam has brought an amendment to extradition law which will legalize the government to easily extradite suspects to mainland China. 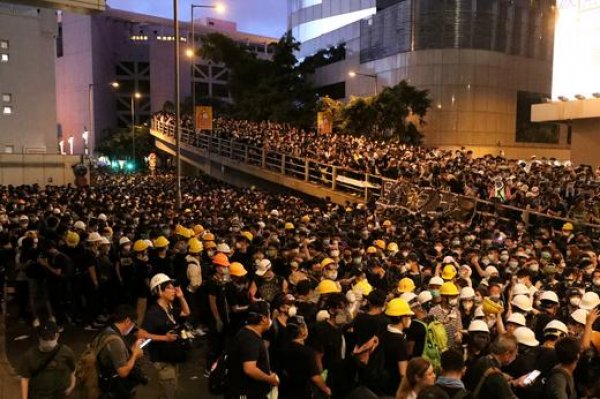 Last week, the anti-extradition bill protests gathered millions of people in the streets across the city where they faced harsh police response. Some of the protesters were arrested following clashes with police forces.

Bent to the pressure from public demand, Lam government suspended the reading of the bill in the Hong Kong Legislative Council last weekend. But the protesters rejected the move demanded completed withdrawal of the proposed bill until Thursday.