Dozens of Palestinians in the Gaza Strip on Monday staged a rally in support of Venezuelan President Nicolas Maduro, who is currently facing an attempted coup.

The rally, organized by the Democratic Front for the Liberation of Palestine (DFLP), was held outside the UN’s office in Gaza City. Demonstrators chanted pro-Maduro slogans, such as, "Greetings from the revolutionaries ... to the symbol of freedom".

"WE SALUTE VENEZUELAN PEOPLE FOR REJECTING US' INTERFERENCE"

Addressing the crowd, leading DFLP member Talal Abu Zarifa said: “We declare our full solidarity with Venezuela and its government under the leadership of the democratically elected Maduro.” “We salute the Venezuelan people's willingness to defend their national dignity against the [foreign] hostility that endangers their future,” he added. Abu Zarifa also hailed the Venezuelan people for “rejecting US interference in their internal affairs”. 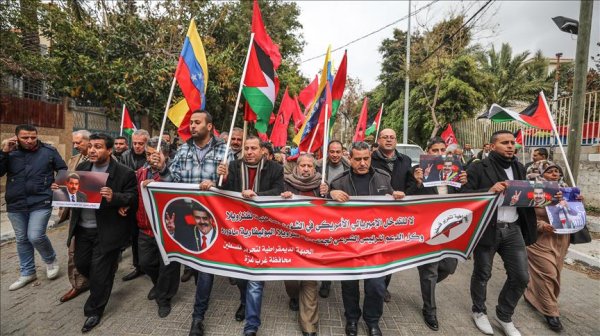 Bolivia and Mexico, meanwhile, both still recognize Maduro as head of state.

Russia and China, for their part, both oppose Washington’s support for Guaido, condemning what they describe as “foreign interference” in Venezuela’s domestic affairs.

Ankara and Tehran have also both thrown their support behind Maduro