Such organizations that were established in opposition to Turkey and Cyprus will not contribute to peace and cooperation in the region, Turkish Foreign Ministry spokesman said.

The Eastern Mediterranean Gas Forum, in which Turkey and the Turkish Republic of Northern Cyprus (TRNC) have been left out, is an unrealistic formation, the Turkish Foreign Ministry said Thursday.

"WE WILL PRESERVE LEGITIMATE RIGHTS OF TURKEY"

"If the purpose of this forum was really cooperation, of course, Turkey and the Turkish Cypriots would be invited to the forum as well," spokesman Hami Aksoy said in a statement. Aksoy stressed that the forum -- established by some countries with political motives -- is dreaming of leaving Turkey out of the energy equation in the Eastern Mediterranean.

The member countries of the Eastern Mediterranean Gas Forum convened in Cairo on Thursday in order to turn the forum into an international organization by signing an establishment charter. 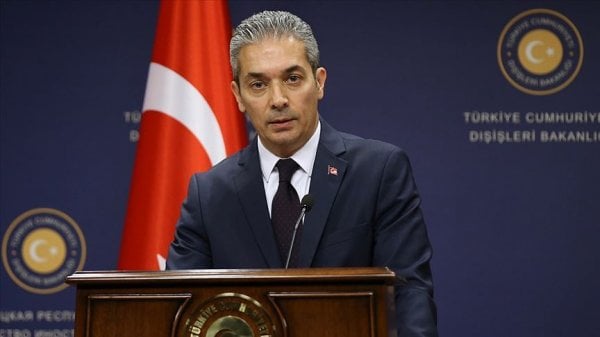 "No initiatives that leave Turkey and Cyprus out of them will succeed in the Eastern Mediterranean. Therefore, this initiative provides new evidence that countries that have left unanswered our calls for dialogue and cooperation are still pursuing vain hope," he said. "We will continue to preserve the legitimate rights and interests of both Turkey and the TRNC."

On Jan. 2, the Turkish parliament ratified a motion authorizing the government to send troops to Libya following deals on military cooperation and maritime boundaries in the Eastern Mediterranean that were struck on Nov. 27 between Ankara and Libya’s UN-recognized Government of National Accord (GNA).