VOTERS DISAPPROVED OF THE WAY TRUMP WAS HANDLING CRISIS

The poll released Wednesday shows Biden with 52 percent of the vote to Trump’s 37 percent.

CNN reported that a majority of registered voters (52%) report they'll support Biden in the general election, with 37% going for Trump, a wider margin than in Quinnipiac's June poll, when 49% backed Biden and 41% supported Trump. 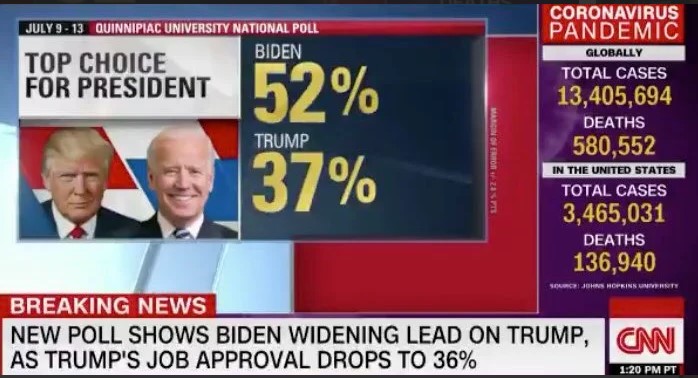 The poll also finds Biden leading Trump with an increasing margin, Biden with 51% support among registered voters over Trump's 40%.

A similar poll from last month had found Biden leading Trump by 8 points. The last time Biden had a double-digit lead in the survey was in May, when he led by 11 points.

According to the poll results, most registered voters (61%) disapprove of the way Trump is handling the reopening of schools, while only 29% approve.