China urges US and UK to stop interfering in Hong Kong

China’s ambassador to London on Monday accused foreign countries including the United States and Britain of interfering in Chinese internal affairs.

The Asian financial hub, which was handed over to China by former colonial ruler Britain in 1997 but enjoys a degree of autonomy under the “one country, two systems” formula, has been plunged into chaos for almost six months.

In London, Ambassador Liu Xiaoming called a news conference at the Chinese Embassy to comment on events in Hong Kong and criticise Western governments and media for their responses to the crisis.

"THEY'RE INTERFERING INTO OUR INTERNAL AFFAIRS"

“Some Western countries have publicly supported extreme violent offenders,” he said. “The US House of Representatives adopted the so-called Hong Kong Human Rights and Democracy Act to blatantly interfere in Hong Kong affairs, which are China’s internal affairs. The British government and the foreign affairs committee of the House of Commons published China-related reports making irresponsible remarks on Hong Kong.” 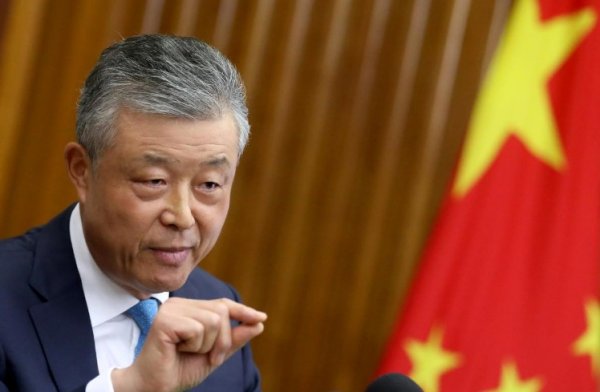 Liu also said that by criticising violent actions by the authorities as well as by the protesters, Britain was in effect taking sides. “I think when the British government criticises Hong Kong police, criticises the Hong Kong government in handling the situation, they are interfering into China’s internal affairs,” he added.