14th round of Pakistan,Turkey meeting concludes

The three-day 14th Round of Pakistan-Turkey High-Level Military Dialogue Group (HLMDG) meeting concluded here at Ministry of Defence on Friday.

A three-day meeting of Turkey and Pakistan agreed to boost the defense cooperation between the two countries, particularly in the region, an official statement said on Friday.

"WE WILL WORK TOGETHER"

The 14th round of Pakistan-Turkey High Level Military Dialogue Group meeting decided that Turkey and Pakistan will work together to enhance defense cooperation, focusing on security and counter-terrorism, a statement by Pakistan’s Defense Ministry said. 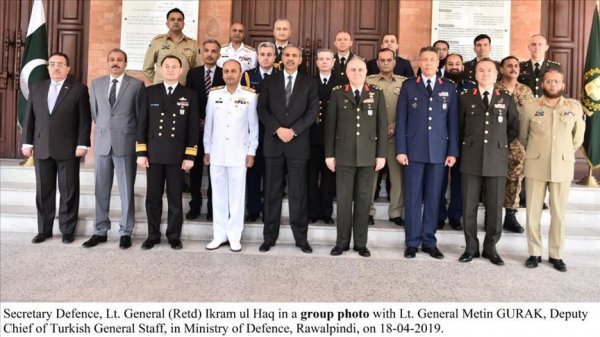 “During the meeting, matters of mutual interest including whole spectrum of bilateral defense cooperation were discussed. Both sides deliberated upon various areas of interest, including security, counter-terrorism and prevailing regional environment particularly with reference to Afghanistan and the Middle East,” the statement said.

As part of his visit, Turkey’s Gürak also held meetings with Pakistan’s Zubair Mahmood Hayat, the chairman of the Joint Chief of Staff Committee, and Nadeem Raza, the chief of General Staff, the statement said. The defense officials discussed cooperation, including military training, co-production of defense equipment and mutual visits, it added.

The 15th round of same meeting between Pakistan- meeting will be held in Turkey on a mutually agreed date, the statement concluded.