Venezuela to withdraw diplomatic personnel from US

All diplomatic personnel in the US to return on Saturday after the closure of its embassy and consulates, says Nicolas Maduro.

Venezuelan President Nicolas Maduro announced on Thursday the withdrawal of its diplomatic personnel from the US. All diplomatic personnel in the US will return on Saturday after the closure of its embassy and consulates in the country, Maduro said during a speech in the capital Caracas.

The move came a day after Maduro announced his country cut off diplomatic relations with Washington and gave US diplomats 72 hours to leave the country -- a demand Washington officials have shrugged off, saying diplomatic personnel will stay at the invitation of opposition leader Juan Guaido.

GUAIDO'S DECLARATION WAS RECOGNIZED BY THE US

On Thursday, the US called on Western hemisphere governments to recognize Guaido as the country's interim president, drawing a swift rebuke from Venezuela's internationally recognized government. A growing number of countries have lined up behind Guaido, the head of the National Assembly, who declared himself president Wednesday under Articles 333 and 350 of the Venezuelan Constitution amid mass anti-government protests. Guaido's declaration was quickly recognized by the US, Canada, and several fellow Latin American nations. 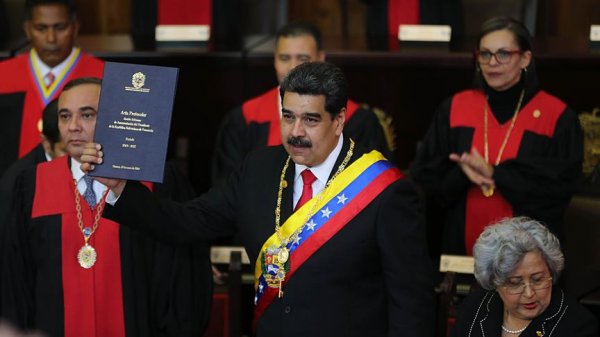 Maduro first took office in 2013 following the death of his predecessor Hugo Chavez. After being inaugurated earlier this month, the Venezuelan president is set to govern for another six-year term, through 2025.

The US has criticized Maduro throughout his time in office, and shown support for the National Assembly as the "last vestige of democracy."