US continues to blame Iran

US has blamed Iran for an attack on 2 tankers in the Gulf of Oman, releasing video footage that it claims shows an Iranian patrol boat removing an exploded mine from one of the vessels' hulls.

The US military released a video Thursday that it said showed a member of Iran’s Islamic Revolutionary Guards Corps (IRGC) removing an unexploded mine from one of two oil tankers targeted in the Gulf of Oman.

US CLAIMS VIDEO SHOWS IRAN REMOVING MINE FOR TANKER

In the black-and-white footage posted on the US Navy's Twitter account, a small boat is seen approaching the damaged Japanese-owned Kokuka Courageous and an individual can be seen allegedly removing what it said to be a limpet mine.

The Marshall Islands-flagged Front Altair and Panama-flagged Kokuka Courageous were on their way to Taiwan and Singapore from Qatar and Saudi Arabia respectively when they were attacked earlier in the day near the Strait of Hormuz. 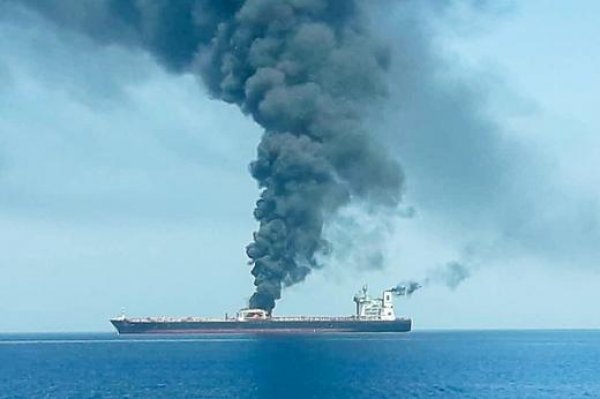 US Secretary of State Mike Pompeo blamed Tehran, describing the attacks as part of "an unacceptable campaign of escalating tension by Iran".

Iran's UN Mission said its government categorically rejected Washington's claim that it was responsible for the attacks and condemned the incident "in the strongest possible terms”.