US claims Hezbollah threat as cause for an action in Venezuela

Secretary of State Mike Pompeo told Fox News reporter Trish Regan on Wednesday that Hezbollah has a presence in Venezuela.

“People don’t recognize that Hezbollah has active cells,” Pompeo said. “The Iranians are impacting the people of Venezuela and throughout South America. We have an obligation to take down that risk for America.” 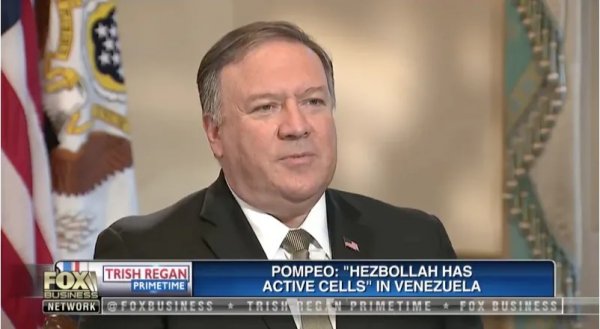 Regan, incredulously, tweeted out that Pompeo had “confirmed” to her that Hezbollah is operating in Venezuela.

The US has long considered the Iranian-backed Lebanese group a terrorist organization, and sanctions on people in Venezuela linked to Hezbollah have been imposed as far back as the George W Bush administration.