UN chief urges all parties in Idlib to uphold ceasefire

Antonio Guterres says a ceasefire in Syria’s Idlib is a necessary step to pave the way for a nation-wide ceasefire.

UN Secretary-General Antonio Guterres has urged all parties involved in the Syrian conflict to maintain their commitments and uphold the ceasefire arrangement in the country’s northern Idlib province.

In a written statement released on Friday, Guterres said: “I am extremely concerned about reported increased military operations in the last few weeks. Counter-terrorism operations cannot override responsibilities to protect civilians," he said. "A ceasefire in Idlib is a necessary step to pave the way for a nation-wide ceasefire."

"IT IS A MORAL OBLIGATION"

Regime attacks in Idlib’s de-escalation zone, in which acts of aggression are expressly prohibited, are believed to have killed at least 138 civilians since the start of the year. Along with regime artillery barrages, Russian SU-34 warplanes struck central Idlib and its rural outskirts, leaving 15 dead, including eight children, the White Helmets civil defense group said Thursday.

“Innocent civilians, the majority of them women and children, have paid the highest price in this conflict because of the blatant disregard for International Humanitarian and Human Rights Law,” the UN chief added. Strengthened international support is urgently required, he said, “if the parties to the conflict are to seriously move towards finding a political solution that meets the legitimate aspirations of all Syrians.” 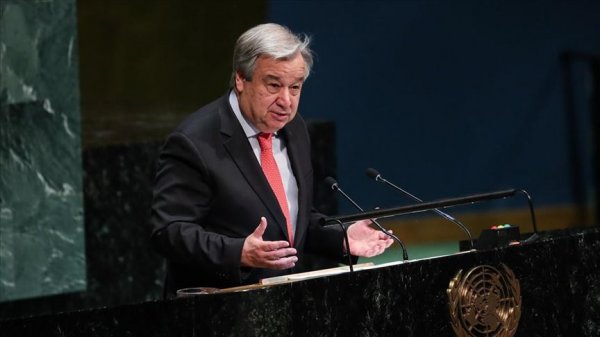 “It is a moral obligation and a political imperative for the international community to support Syrians to unite around a vision for their common future that protects civilians, alleviates suffering, prevents further instability, addresses the root causes of the conflict and forges, at long last, a credible negotiated solution,” the UN chief noted.

Syria has only just begun to emerge from a devastating conflict that began in 2011 when the Bashar al-Assad regime cracked down on demonstrators with unexpected ferocity.

Hundreds of thousands of civilians have been killed or displaced in the conflict, mainly by regime airstrikes targeting opposition-held areas.