Turkey will continue to defend Syria's territorial integrity and protect civilians in the war-torn country, including from terrorist groups, Turkey’s foreign minister said in the Qatari capital Doha on Thursday.

Cavusoglu said he and his counterparts discussed how to promote lasting peace in Syria.

He also said that the terrorist YPG/PKK continues to launch attacks in northern Syria, near the Turkish border, claiming more than 25 civilians over the last two months.

The YPG is the Syrian branch of the PKK, a terrorist group that has taken over 40,000 lives in the last 35 years. 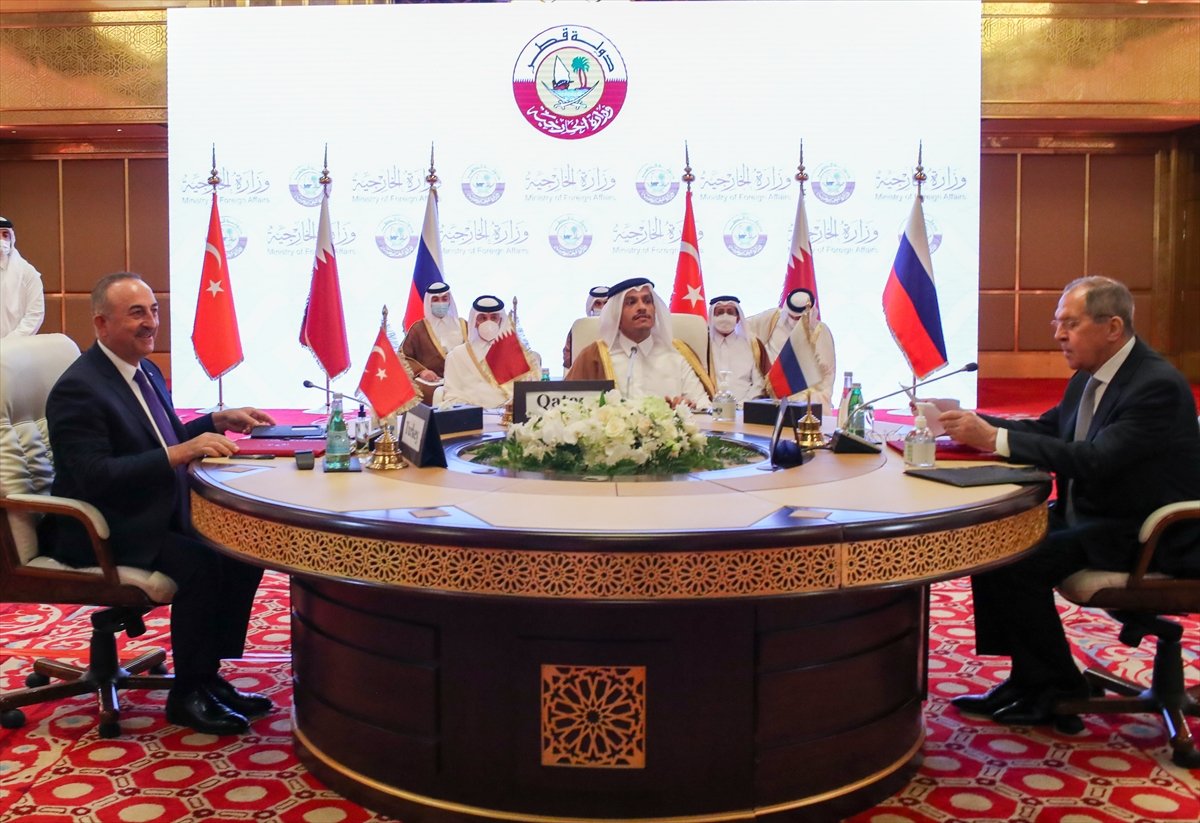 Underlining that civilians’ legitimate demands have been ignored, Cavusoglu said Syrians have been suffering from the fallout of the civil war for over a decade.

Al Thani said he had discussed with his Turkish and Russian counterparts the "humanitarian situation in Syria and facilitating the delivery of aid."

"We stressed the unity of the Syrian territories and rejected a military solution to the crisis," he said.

Stressing the importance of the Syrian crisis for Qatar and the humanitarian role of Doha, he added: "There is no need to have a military presence in Syria, and we support the unity of its Arab lands." 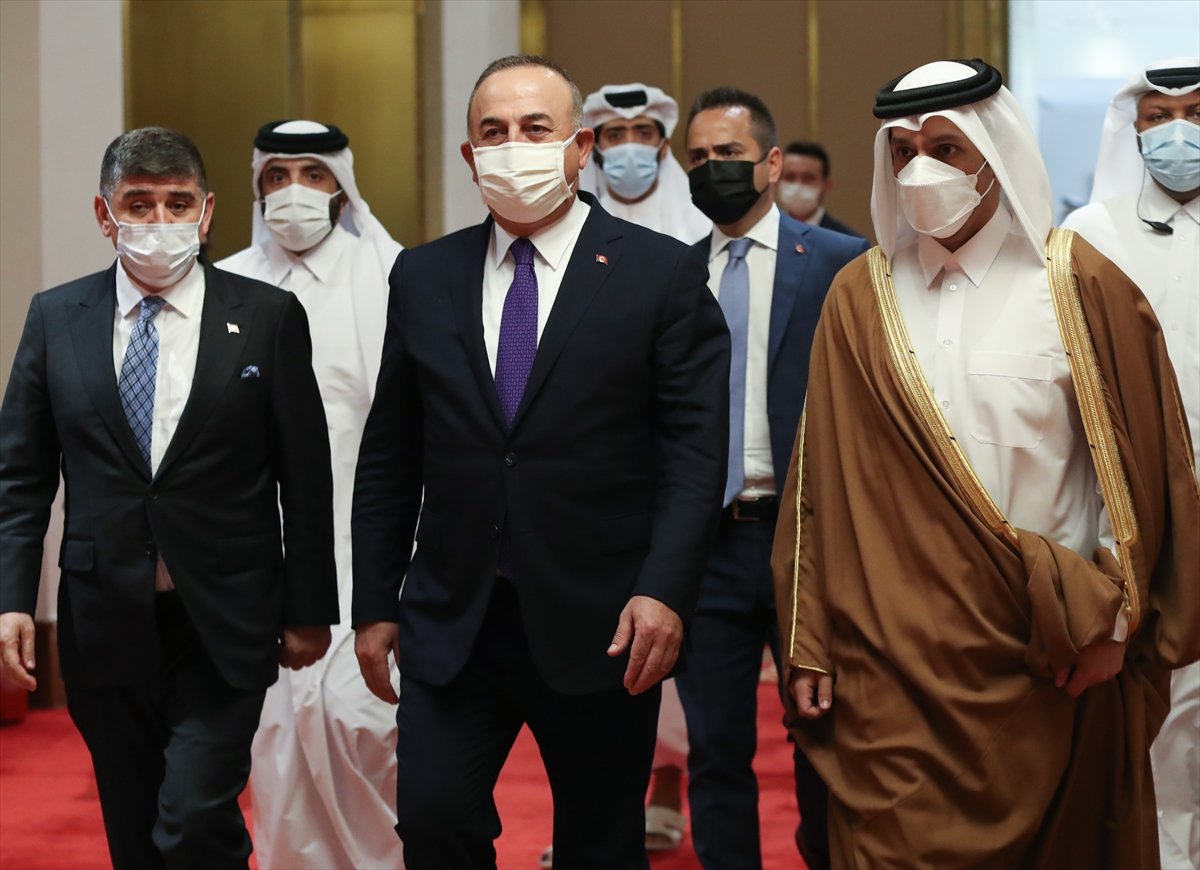 For his part, Russian Foreign Minister Sergey Lavrov said Turkey, Russia, and Qatar agreed to counter separatist attempts in Syria, something which also threatens the security of neighboring countries.

Lavrov said that although Thursday’s meeting was the first of its kind at the ministerial level, special representatives of the three countries have been working on the Syrian track for over a year.

"Our common goals – of Russia, Turkey, Qatar – are reflected in the joint statement that we have just approved, which confirms our determination to fight terrorism in all its forms and manifestations, to counter separatist plans that undermine the territorial integrity of the Syrian Arab Republic, which threaten the security of neighboring countries," he said.

Lavrov added that the trio stressed the importance of the Syrian Constitutional Committee and expressed readiness to support its work, including in cooperation with Special UN Syria Envoy Geir Pedersen.

"We agreed to use our opportunities to ensure that the next meeting of the editorial commission of the Constitutional Committee, which should take place before the beginning of the holy month of Ramadan [in mid-April], will be productive," he said. 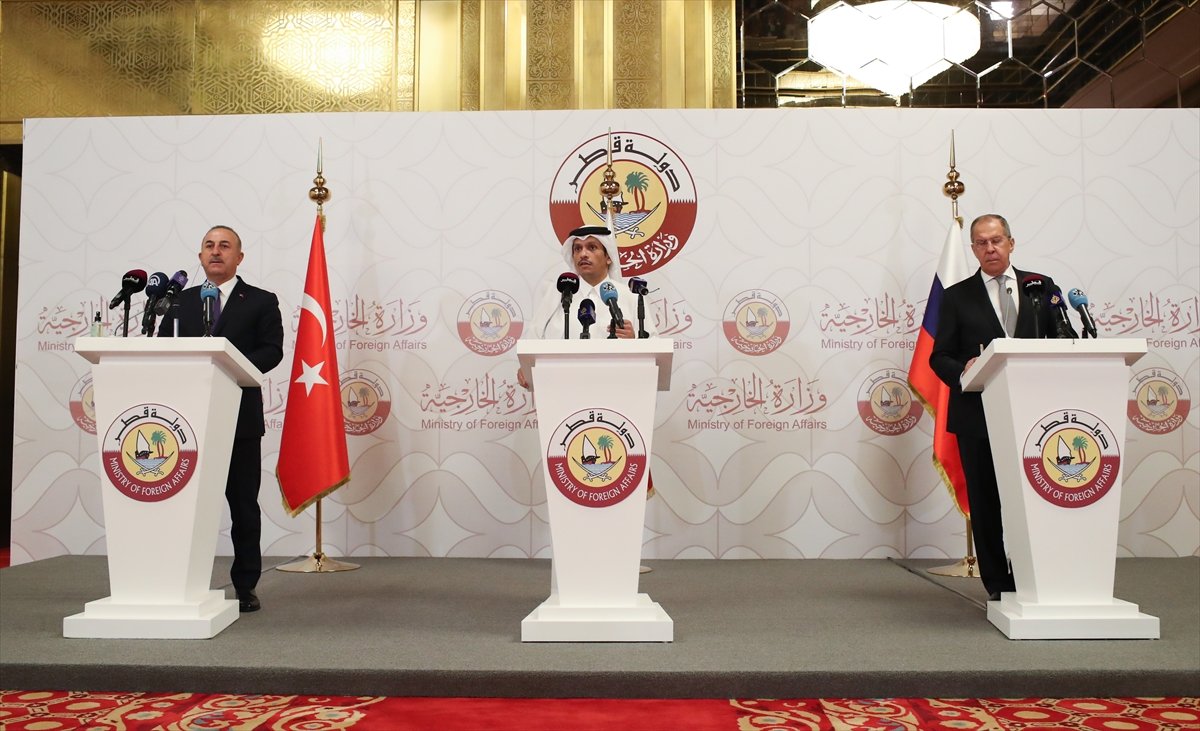 The three countries will seek opportunities to encourage Syrian refugees to return to their places of permanent residence and take measures to strengthen trust between the Syrian sides, Lavrov said.

Coordination in the trilateral format will be further guided by special representatives of the three ministers, and this work will be a helpful complement to the work that Russia, Turkey, and Iran are carrying out in the Astana format, he said, referring to a peace process that began in the former capital of Kazakhstan.

Syria’s return to the Arab League along with reopening Arab countries' embassies in the country would also promote peace, Lavrov said.

Asked about the difference between the Astana and Doha peace process formats, Lavrov said the Astana format works with all aspects of resolution in Syria, including the military one.

As for the Doha format, Qatar will not have a military presence in Syria such as Turkish-Russian patrols in Idlib, northern Syria, as its role is more diplomatic and humanitarian, he said.

"I can only welcome Qatar's willingness to contribute to creating the conditions for overcoming the current tragic situation in the Syrian Arab Republic," Lavrov said. 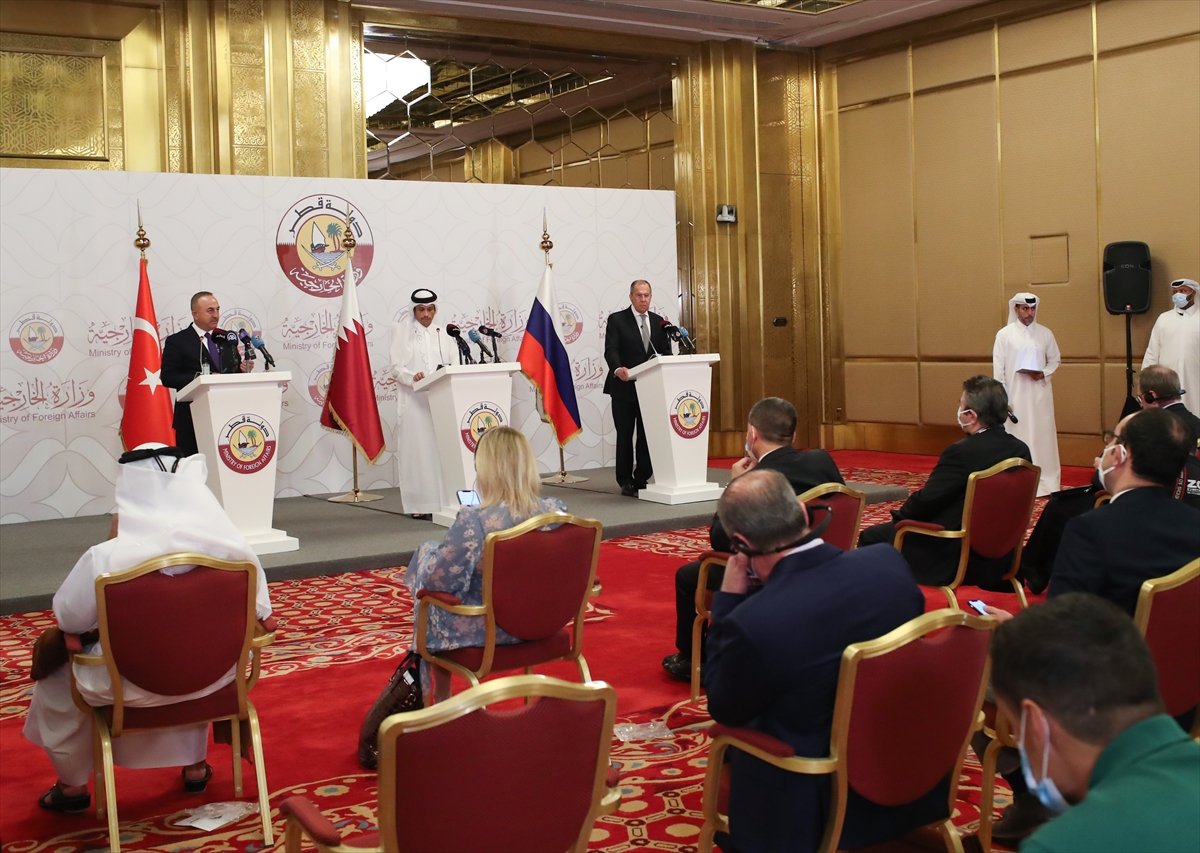 Asked about an upcoming intra-Afghan meeting in Moscow, Lavrov said Russia is not competing with Qatar for the right to lead Afghan peace talks.

There are a number of formats, and meetings on Afghanistan took place in many countries, including Turkey, he added.

The Moscow meeting is being summoned to help the sides to bring their positions closer together, he said.

"We have closely followed and actively supported the Doha negotiations. I cannot agree that they have developed successfully, there are many unresolved problems. And we want to help continue these negotiations with more constructive positions that need to be taken by each party participating in this process. That is why the Moscow meeting is being convened," he said.

The meeting in Moscow was initiated by the "troika on Afghan settlement" – Russia, the US, and China – with the participation of Pakistan and the Afghan sides, he said.

"This format is designed to encourage the parties to be more cooperative through informal discussions and free conversation," Lavrov said. 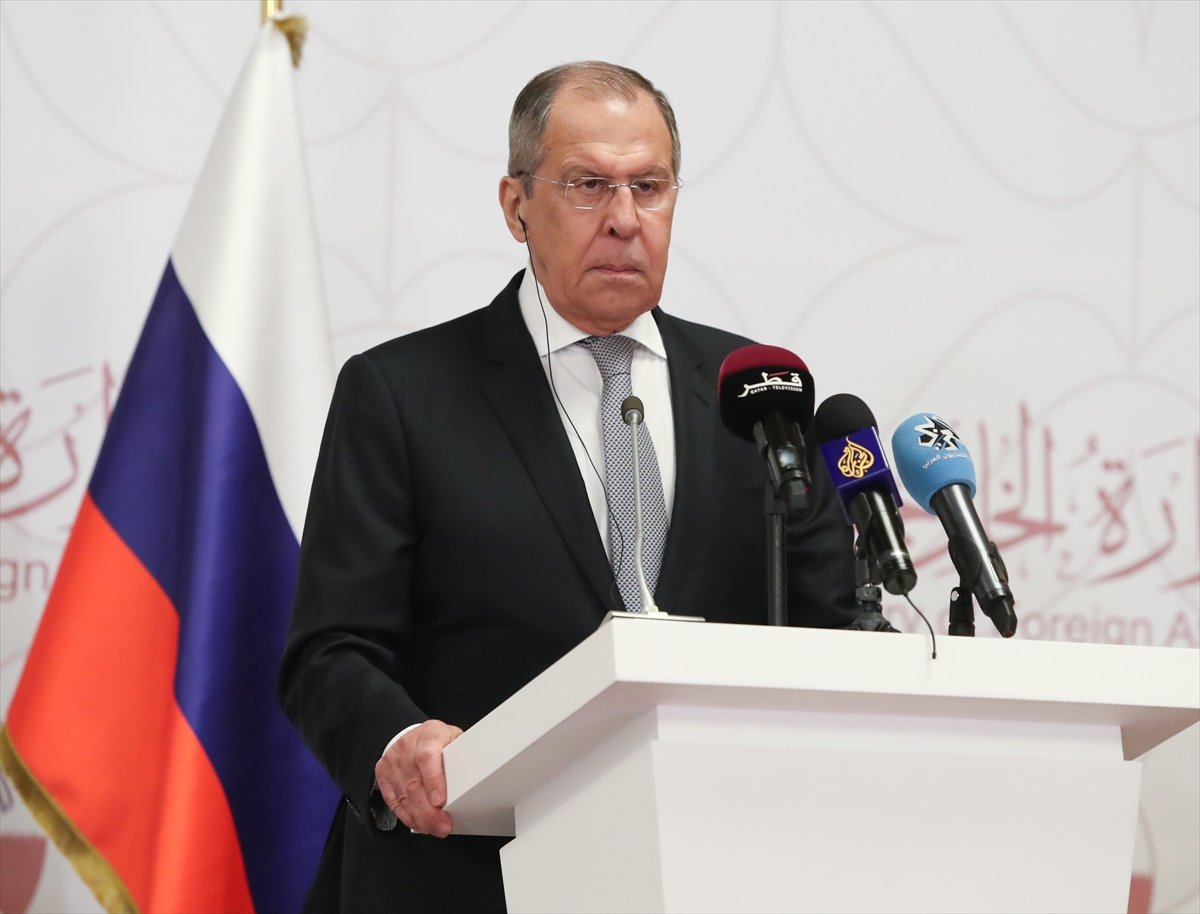 Following the meeting, the foreign ministers issued a written statement stressing their determination to stand against separatist agendas in Syria.

The statement emphasized their commitment to preserving Syria’s sovereignty, independence, unity, and territorial integrity in line with the UN Charter.

The foreign ministers reaffirmed their commitment to advancing a political process facilitated by the UN rather than a military solution, it added.

They stressed the need to increase humanitarian assistance without discrimination, politicization, or preconditions to support improving the humanitarian situation in Syria, it said.

They called on the international community, the UN, and its humanitarian agencies to enhance their efforts towards Syria, it added.

Underlining the importance of facilitating the safe, voluntary return of Syrian refugees, and internally displaced persons, they expressed their readiness to continue interaction with all relevant parties, including the United Nations Refugee Agency (UNHCR) and other specialized international agencies. 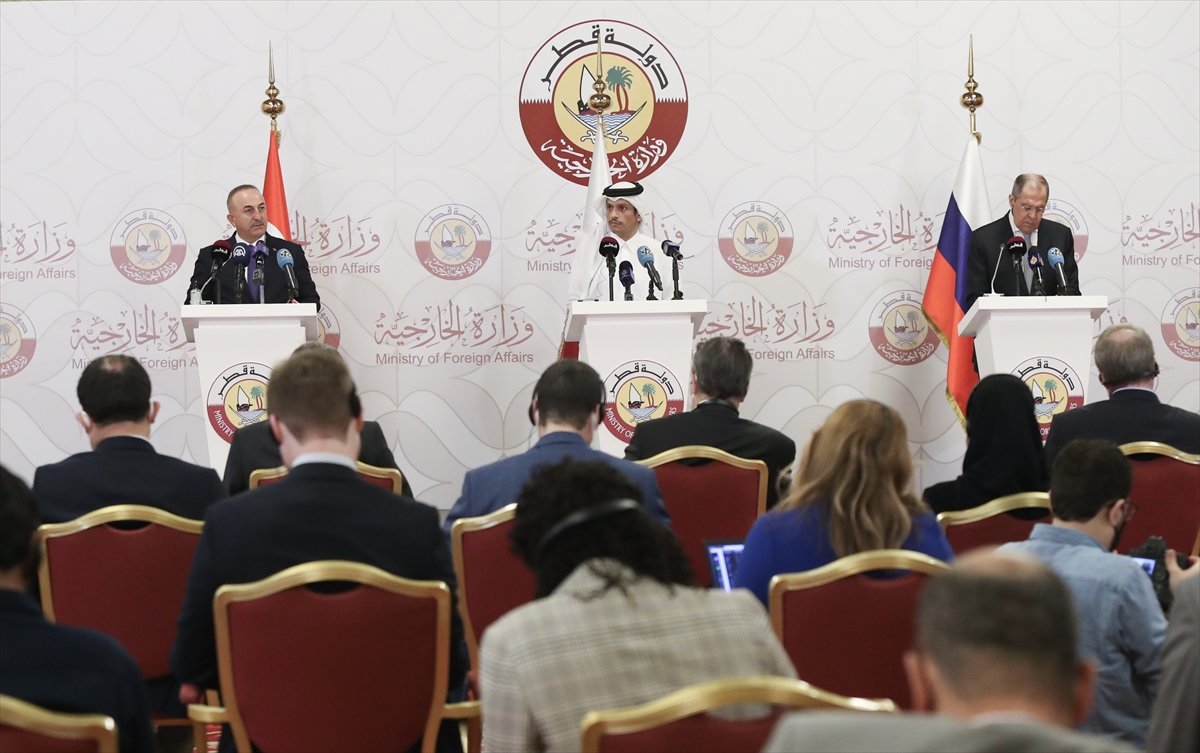 On the coronavirus pandemic, they expressed their “grave concern” over the humanitarian situation in Syria and the impact of the pandemic in the country, it said.

They called on the UN and its agencies, particularly the World Health Organization, including through the COVAX initiative, to prioritize vaccination inside Syria.

They emphasized the important role of the Constitutional Committee and ensuring respect for its terms of reference and core rules of procedure by the Syrian parties, expressing their support for constructive engagement without foreign interference in the work of the committee.

They also welcomed the efforts of Special UN Envoy for Syria Geir Pedersen.

They underlined their determination to combat terrorism in all forms and manifestations and stand against separatist agendas undermining Syria’s sovereignty and territorial integrity as well as threatening the national security of neighboring countries.

They highlighted the importance of cooperation and support for confidence-building initiatives between the Syrian parties on the release of detainees, especially women, children, and the elderly, which would help advance the political process by creating a positive atmosphere between Syrian parties based on mutual trust.

Syria has been embroiled in a civil war since early 2011, when the Assad regime cracked down on pro-democracy protests with unexpected ferocity.

Over the past 10 years, hundreds of thousands of people have been killed and more than 10 million displaced, according to UN officials.