Turkey ready to take over security in Manbij

Turkey is ready to take over the security in Syria's Manbij without delay, President Recep Tayyip Erdoğan said during a phone conversation with his US counterpart late Sunday.

A statement from the Turkish presidency said Erdoğan and US President Donald Trump agreed to take joint measures to clear Daesh's remnants in Syria and prevent the group's resurgence. Erdoğan said that Turkey will not allow PKK and its Syrian affiliate PYD/YPG to destabilize northeastern Syria.

The two leaders also discussed the bilateral relations, as well as the latest developments in Syria. 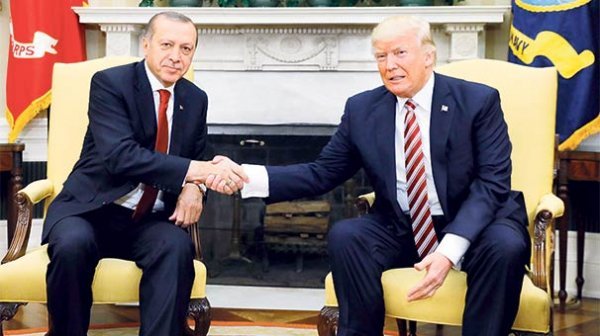 Erdoğan expressed his condolences to Trump over American staff who lost their lives in last week's terrorist attack in Manbij, adding that it was a provocation to influence the US decision to withdraw from Syria.

“President Trump spoke with President Erdoğan of Turkey today on a number of important bilateral issues. President Erdoğan expressed his condolences for the tragic loss of American lives in Manbij, Syria this week," White House spokeswoman Sarah Sanders said in a statement. "President Trump underscored the importance of defeating terrorist elements that remain in Syria. The two leaders agreed to continue to pursue a negotiated solution for northeast Syria that achieves our respective security concerns. They also discussed their mutual interest in expanding the trade relationship between the United States and Turkey,” Sanders said.

At least four Americans were killed, and three others injured in an apparent suicide attack in Manbij, Syria, the Pentagon said last week.

US Central Command said two service members died, as well as a Pentagon civilian and a contractor while conducting a "local engagement." A defense official speaking on condition of anonymity said the contractor was working as an interpreter. All of the wounded Americans were service members, according to the command.