Turkey believes that disputes with Greece can be resolved through constructive dialogue, the Turkish foreign minister said on Thursday.

In a joint news conference with his Greek counterpart Nikos Dendias, Mevlüt Çavuşoğlu said that faits accomplis and provocative rhetoric should be avoided in relations between the two countries.

Highlighting that trying to find a solution through third parties was not the right approach, Çavuşoğlu said the revival of dialogue channels between the two countries again was “very positive.”

“It is in our interests that minorities in both countries live in peace and prosperity and it will have positive impacts,” he said, adding that minorities in Turkey and Greece were among the topics of discussion during their meeting.

Reiterating Turkey’s stance that Ankara is in favor of fair share in the Eastern Mediterranean, Çavuşoğlu recalled the Turkish president’s multilateral conference proposal to the EU on the issue. 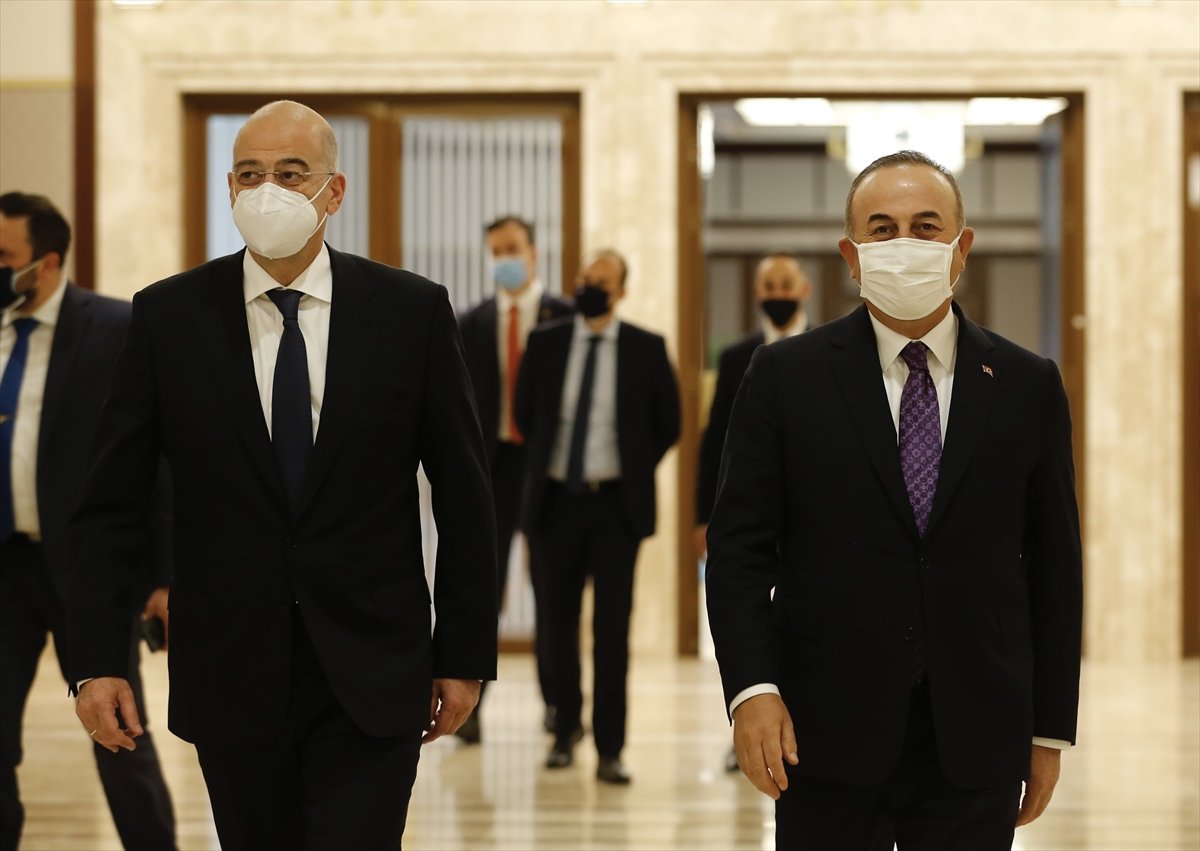 He said Turkey’s detailed suggestions were sent to the EU and the country is waiting for a response from the bloc.

Stating that an informal 5+1 meeting on Cyprus is planned to be held in Geneva in late April, Çavuşoğlu said they agreed with Dendias that they will meet in Geneva.

“It is important for everyone to come to this meeting with open ideas, in terms of the healthy functioning of the next period,” he said.

The Turkish minister said that trade and economic relations were of great importance between the two countries and that resumption of flights and opening of border crossings were also important in this regard.

He also noted that Ankara desires to see more effective cooperation in the fight against terror groups, including Fetullah Terrorist Organization (FETO) and the PKK.

On the 2016 migration deal between Turkey and the EU, Çavuşoğlu said that updating the deal would offer a better cooperation opportunity with Greece in the area of migration.

“As a result, we want to continue this dialogue without preconditions and we want to develop our relations with Greece in every field, as two neighbors and allies,” Çavuşoğlu said, adding that he and Dendias discussed ways to improve relations in the coming period.

He said the Greek minister’s visit and the dialogue they started were of importance for resolving the disputes. 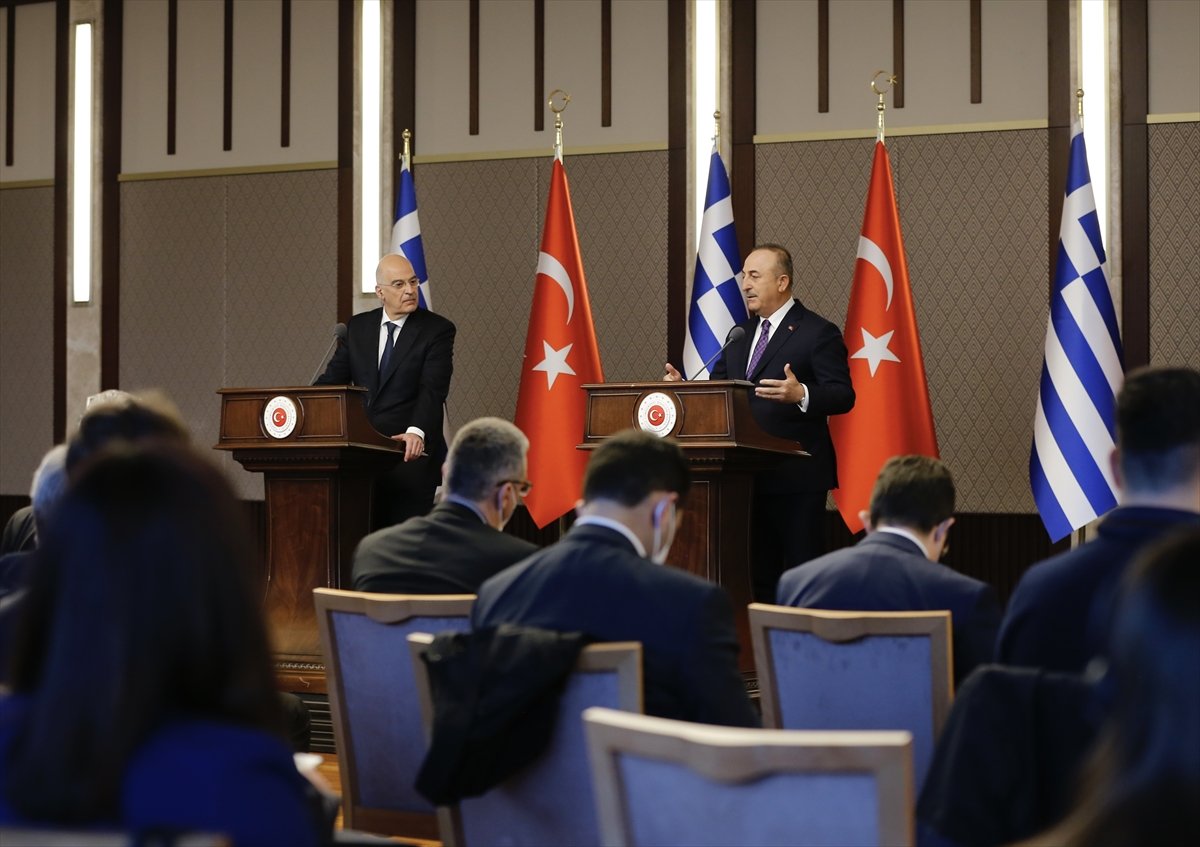 “We wanted this first meeting to continue in a more positive atmosphere, but in his remarks, Nikos Dendias, unfortunately, made extremely unacceptable accusations against my country,” Çavuşoğlu said.

He said the claim that Turkey violated Greece’s sovereignty rights was unacceptable, adding: “Turkey is capable of protecting its rights, especially in Eastern Mediterranean, and the rights of Turkish Cypriots.”

Çavuşoğlu stated that Turkey never used the issue of migration against the EU and Greece, and said that it fully implements the deal.

“But the EU did not implement it,” he said, adding that Greece pushed 80,000 asylum seekers back in the last four years.

He said those asylum seekers who did not pass through Turkey were also pushed to the sea, adding: “We did not talk about this in front of the press, but you are coming here and trying to accuse Turkey to give a message to your country.”

Çavuşoğlu said friendly and positive messages were given by Turkey during both the meetings and the press conference and added that it is also ready to resolve disputes through dialogue and to strengthen cooperation.

“But if you heavily accuse my country and my nation in front of the press like this, we have to respond to that,” he said. 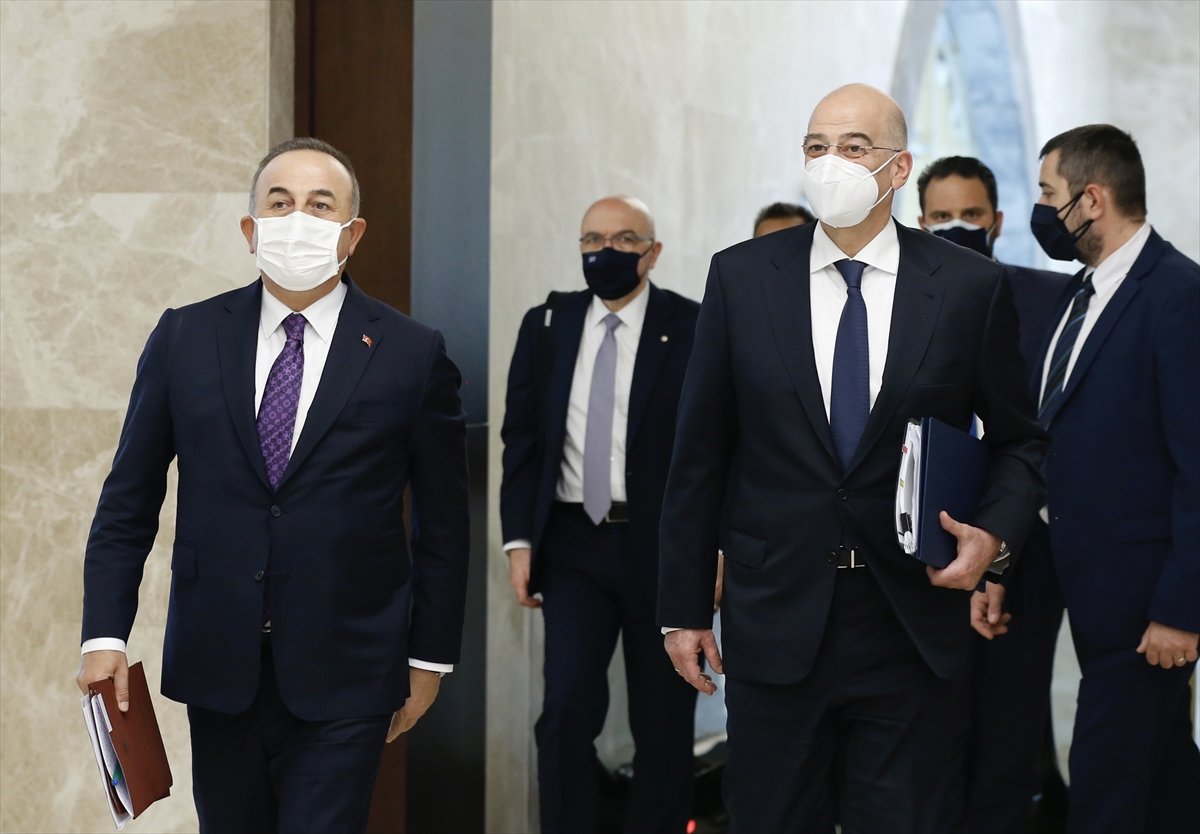 He said the two countries have “serious” disagreements, however, the continuation of dialogue is important.

Çavuşoğlu stressed that the disputes could only be resolved through mutual understanding and approach.

He said they discussed outstanding issues, problems of the Turkish minority, the fight against terrorism, migration, and regional issues.

"Expecting a more sincere and constructive attitude from Greece," he noted.

For his part, Dendias said his country and Turkey can create a positive agenda in the field of economy.

“In this context, we hope that our economic cooperation that existed in the past years will be taken further,” he said.

He said the talks took place in an open and sincere environment, adding: “Communication channels between the two countries should remain open. Our primary goal is to establish peaceful coexistence on the basis of international law."

Dendias went onto say that the two countries should continue to coexist under the basic rules of NATO and the UN charter, of which they became members about 70 years ago, and the principles of the EU. 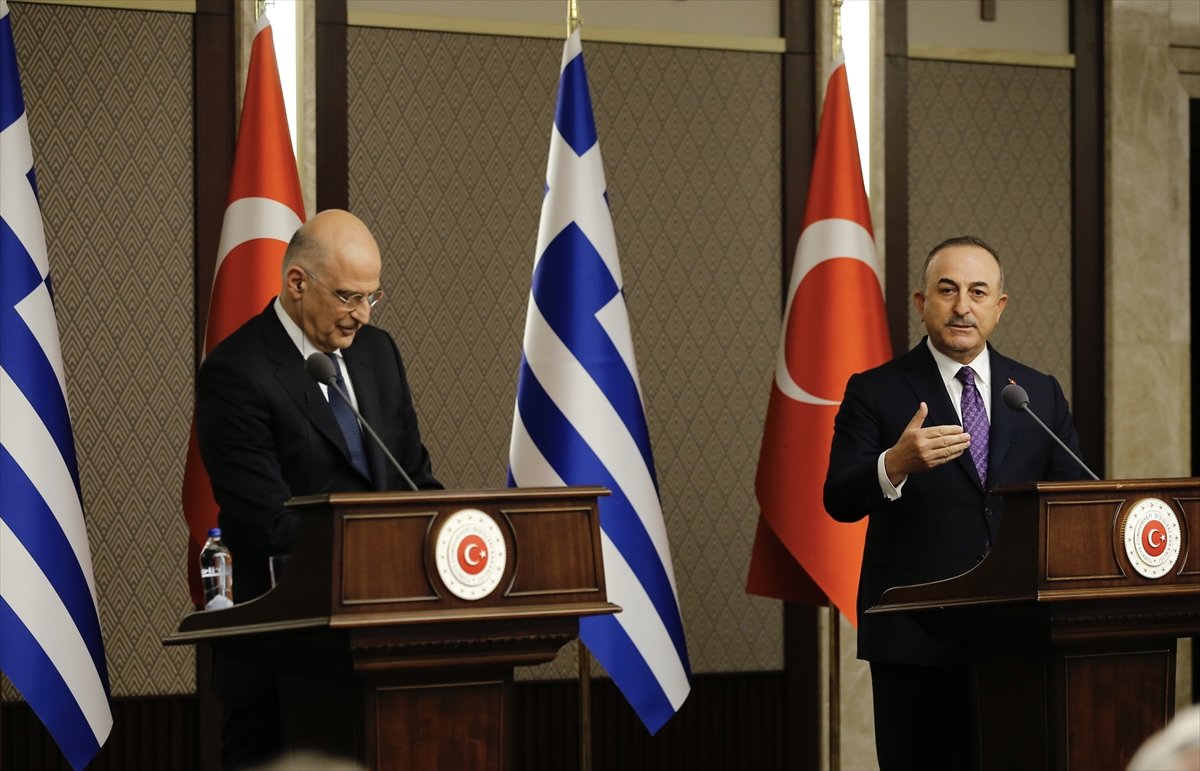 Noting that Turkey has repeatedly expressed EU membership as a strategic goal, the Greek foreign minister said: “Likewise, I welcome discussions on confidence-building measures to be taken.”

He also said that they agreed with Çavuşoğlu to develop cooperation between the two countries in various fields.

Turkey, which has the longest continental coastline in the Eastern Mediterranean, has rejected maritime boundary claims by Greece and the Greek Cypriot administration, stressing that their excessive claims violate the sovereign rights of Turkey and the Turkish Cypriots.

Last year, Ankara sent out several drillships to explore energy in the Eastern Mediterranean, asserting its rights in the region as well as those of the Turkish Republic of Northern Cyprus. 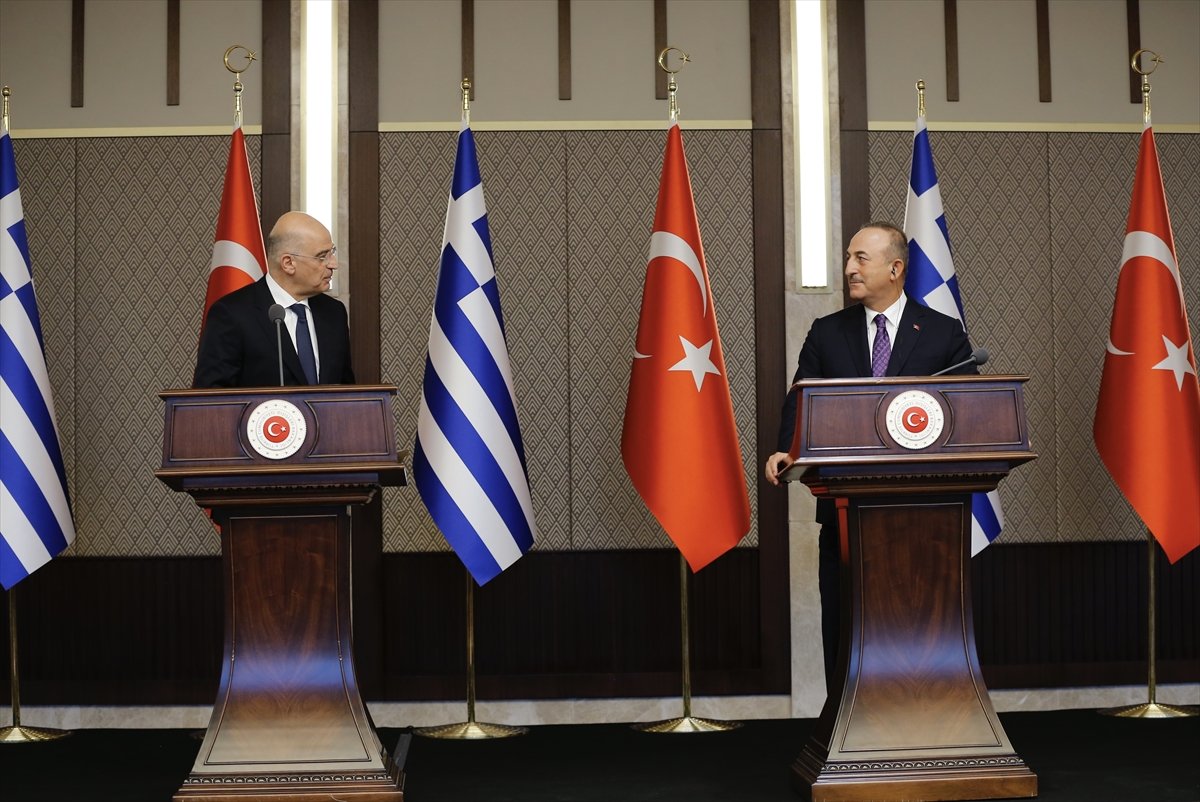 Dendias said that it is necessary to avoid provocative rhetoric and actions in bilateral relations, adding it is the precondition for the development of relations between the two countries.

He claimed that violations have increased dramatically in the recent period and these actions constitute an obstacle to establishing an atmosphere of trust.

Noting that he met with Greek Orthodox Patriarch Bartholomew in Istanbul on Wednesday to listen to the problems of the Greek minority in Turkey, the Greek foreign minister said: "Here I had the opportunity to state that there is a Muslim minority in Greece. According to the Lausanne Treaty, the minority here [in Greece] is Muslim.”

He said that he urged "to stay away from fake news and provocative rhetoric" during the meeting with Çavuşoğlu, noting these discourses prevent the development of relations between the two countries.

Touching upon the Cyprus issue, he reminded the UN’s five-member summit to be held in Geneva two weeks later and said: “We hope that all parties will come to this summit in good faith and in this way, the negotiations on the solution of the Cyprus problem will begin again.”

“As you know, the only solution based on UN Security Council resolutions and in line with the European acquis accepted by the international community, except for one country, is a bilateral, bi-community federal solution,” he added. 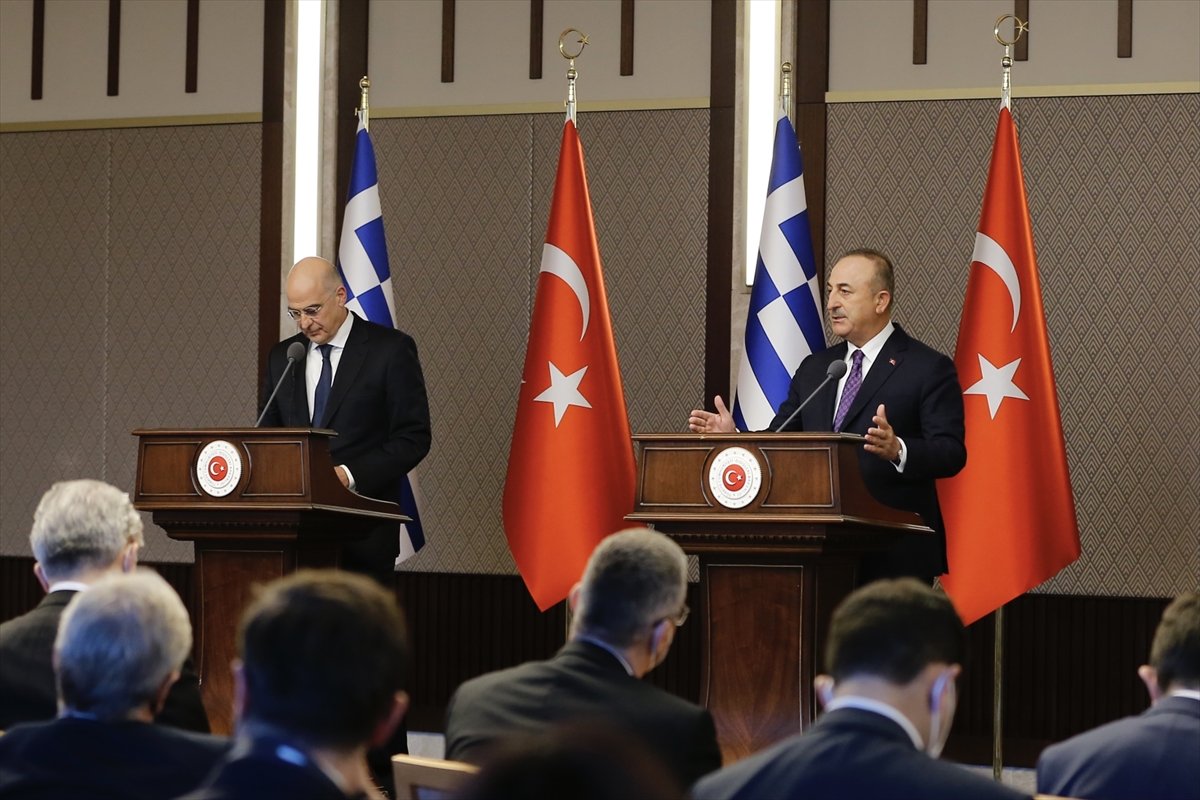 Noting that the Turkey-EU relations were also evaluated during the meeting, Dendias said that Greece supports Turkey's EU membership.

Noting that they are ready to deal with visa liberalization issues, the Greek minister said his country has shown a constructive attitude in this regard.

He said that the principles and values of the EU, including the European acquis, must be respected. “This requires respecting the sovereignty, territorial integrity, and sovereign rights of all member states.”

“If Turkey continues to violate our sovereignty and our sovereign rights, then of course measures on the table is next on the agenda. Of course, we do not hope that such a thing will happen.”

Dendias claimed that Greece was threatened with a war as it exercised its rights under the UN Convention on the Law of the Sea (UNCLOS) and international law.

Touching upon the memorandum on the limitation of maritime jurisdictions, which was signed between Turkey and Libya, he claimed that the memorandum violates the sovereign rights of third countries and does not comply with international law.

On the 2016 deal between the EU and Turkey on refugees, he said the duo also talked about signing a new agreement on the issue.

“But whatever agreement is signed, the will to take and implement the necessary actions is necessary to make it a success,” he said.

Regarding the reopening of the Kariye Museum, also known as Chora, and Hagia Sophia as mosques, the Greek minister said he expressed expectation that Turkey will change its decision. 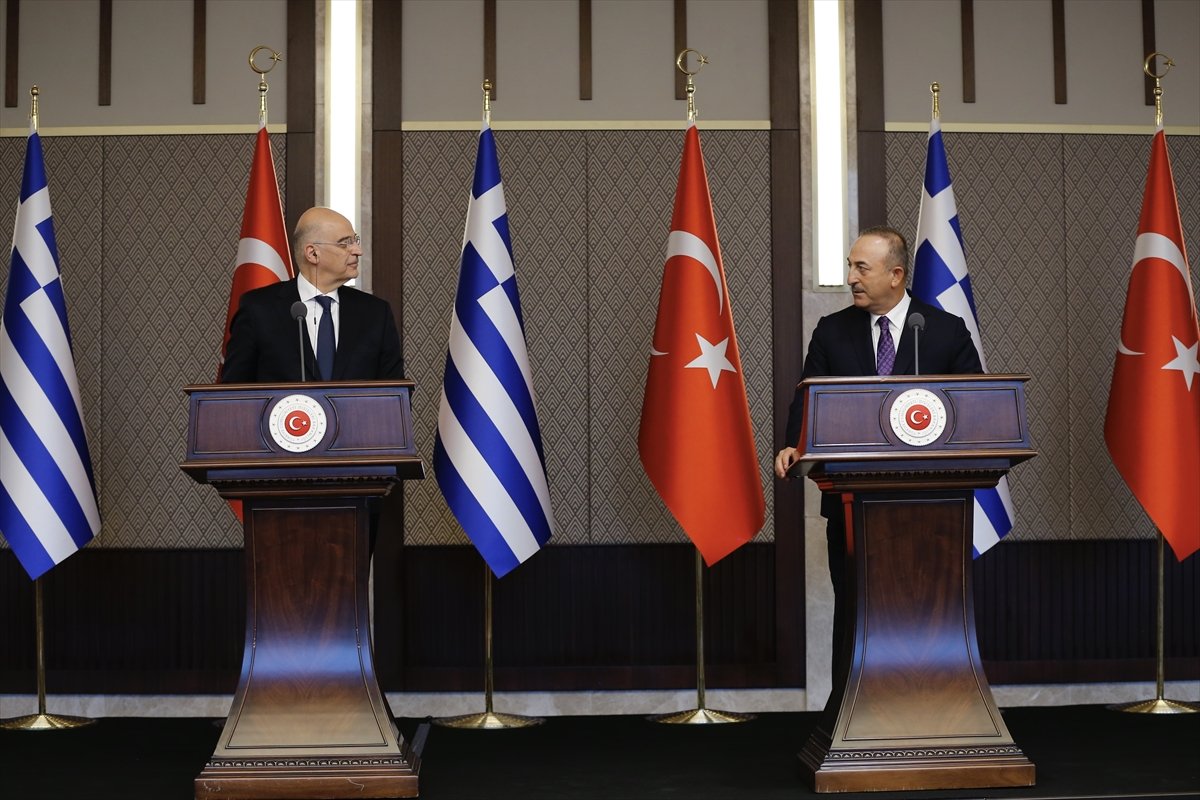 Dendias invited the Turkish foreign minister to visit Greece, saying it is in the interests of both countries to cooperate in geography where many problems exist.

He continued his claims saying Turkey had violated the territorial integrity of the country by flying more than 400 flights over Greece’s territory.

Reminding Çavuşoğlu's remarks on disarmament of the [Greek] islands, he claimed that there are soldiers on the islands because there is a threat.​​​​​​​