President Donald Trump made the decision to remove the US troops from Syria during a telephone call with his Turkish counterpart, The Associated Press reported Friday.

Trump made the decision without consulting his top national security officials and key US allies, citing two officials briefed on the matter.

Trump's top officials prepared a list of talking points for him ahead of his Dec. 14 call with Turkish President Recep Tayyip Erdoğan amid Ankara's plan to conduct a military offensive in Syria. But Trump shook them off, instead siding with the Turkish president during the call, according to The AP.

ERDOĞAN: WHY ARE YOU STILL IN THE REGION

“The talking points were very firm,” one official told the news agency, adding that Trump was advised to oppose the potential Turkish offensive into northeastern Syria. “Everybody said to push back and try to offer (Turkey) something that’s a small win, possibly holding territory on the border, something like that,” the official added.

Erdoğan asked Trump why he is still in Syria given that Daesh had been reduced to holding one percent of the territory it had once controlled, noting Trump has repeatedly insisted the only reason for the US military presence was to defeat the terrorist group. 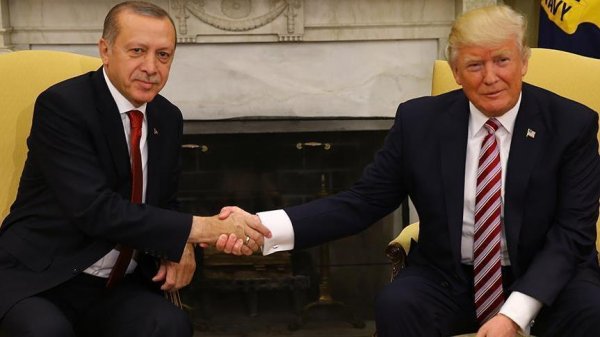 Trump then asked National Security Advisor John Bolton, who was listening in on the call, why US troops are still in Syria if that is the case, and Bolton acknowledged Daesh had been significantly rolled back. But he insisted the national security team agreed the victory had to be enduring, which required stripping Daesh of all its territory.

But Trump was unswayed, pledging a withdrawal to Erdoğan who was caught off guard by the announcement, counseling Trump against a "hasty" removal of US forces.

Trump, however, has been unswayed pledging to pull the 2,000 US troops in Syria out of the country. His decision set off a frenzied response within Trump's national security team to figure out how to delay the action, but they were rebuffed by Chief of Staff John Kelly and his incoming successor Mick Mulvaney who said the president was insistent.

Trump's top officials had for months been telling the president the fight against Daesh is far from over, calls the president ignored when he declared mission accomplished on Tuesday. Defense Secretary James Mattis has since resigned from his post effective at the end of February, citing a divergence of views with the president on an array of topics including how the U.S. treats its allies.

"We must do everything possible to advance an international order that is most conducive to our security, prosperity and values, and we are strengthened in this effort by the solidarity of our alliances," he wrote in his resignation letter. "Because you have the right to have a Secretary of Defense whose views are better aligned with yours on these and other subjects, I believe it is right for me to step down from my position."