We do not tolerate people speaking other languages, says notice displayed in a block of flats in UK’s Norwich.

British police is investigating a racist Brexit poster that demands residents of a council block to speak no other languages but English or leave the country.

The notice discovered on a fire door of council flats in Norwich was shared on Twitter after it was spotted by residents Friday morning before the Brexit deadline.

"SPEAK ENGLISH OR MOVE OUT!"

“As we finally have our great country back we feel there is one rule to that needs to be made clear to residents,” the notice said under the title “Happy Brexit Day.” “We do not tolerate people speaking other languages than English in the flats. We are now our own country again and the Queen's English [sic.] is the spoken tongue here,” it said.

“If you do want to speak whatever is the mother tongue of the country you came from, then we suggest you return to that place and return your flat to the council so they can let British people live here and we can return to what was normality before you infected this once great island. It is a simple choice, obey the rule of the majority or leave. You won’t have long till our government will implement rules that will put British first. So, best evolve or leave,” it added. 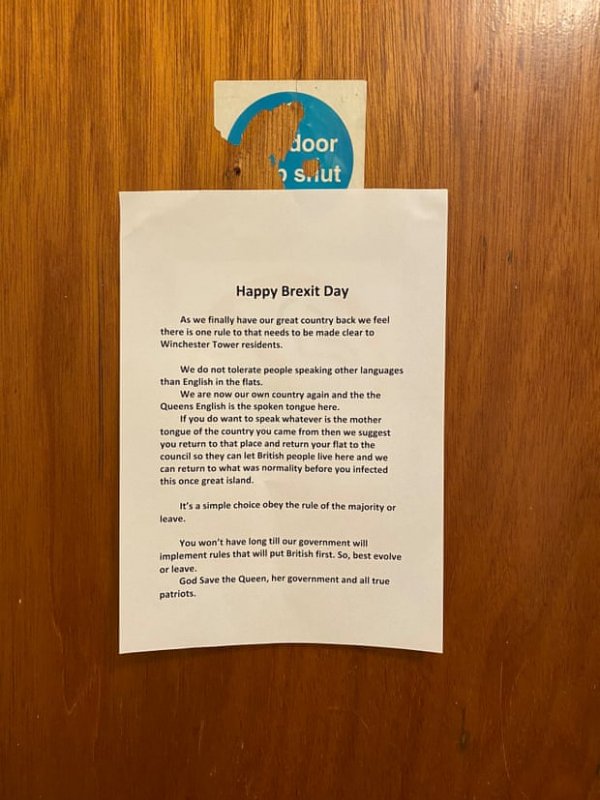 POLICE: WE TAKE THIS VERY SERIOUSLY

Norwich City Council reacted to the poster, saying it won’t tolerate this behavior. “As soon as we became aware of this incident, we reported it to Norfolk Police and they are investigating,” the council said in a statement.

"We take this very seriously and encourage residents to contact us or the police if they have any concerns," it added.