Putin hailed the decision by President Trump to withdraw US forces from Syria, calling it right because the US troops were not needed.

Russian President Vladimir Putin on Thursday said he agreed with US President Donald Trump that Daesh terrorist group has been defeated.

"RIGHT THING TO DO"

Putin said that the US announcement it will withdraw its troops from Syria is “the right thing to do” though he expressed skepticism about whether it will actually take place. He added that he broadly agreed with Trump’s view that Daesh has been defeated in Syria. “Donald’s right and I agree with him,” he said at his annual press conference in Moscow on Thursday. 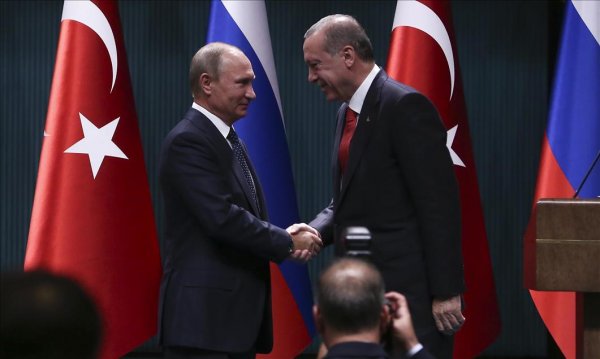 Washington's has come after a phone call between President Recep Tayyip Erdoğan and Donald Trump. Referring to the phone call, "Everything that has followed is implementing the agreement that was made in that call," he added.

"THE ROLE OF ERDOĞAN IS GREAT"

Putin said both Turkey and Russia are working for strengthening bilateral relations in different domains, including the fight against terrorism and economy.

"Turkey pursues an independent international policy, we appreciate it very much, this creates predictability and stability of the relations. In this sense, the role of the Turkish president is great. We hope, this tendency will be continued under further leadership of Mr. Erdoğan," he said.