Those who took sides with putschists in Libya instead of its legitimacy were allies in massacres, says Turkish president.

Protecting Libya's sovereignty, territorial integrity, political unity, and the welfare of the Libyan people are among Turkey's top goals, said Turkey’s president on Monday after meeting with the prime minister of Libya's Government of National Unity.

At a press conference later, Erdoğan said that Turkey's support for Libya helped prevent the fall of the capital Tripoli as well as more massacres by putschists and helped provide a cease-fire.

"Those who took sides with putschists and the coup in Libya instead of its legitimacy, rights, and justice were allies in the massacres," he said, referring to recent conflict in the country. 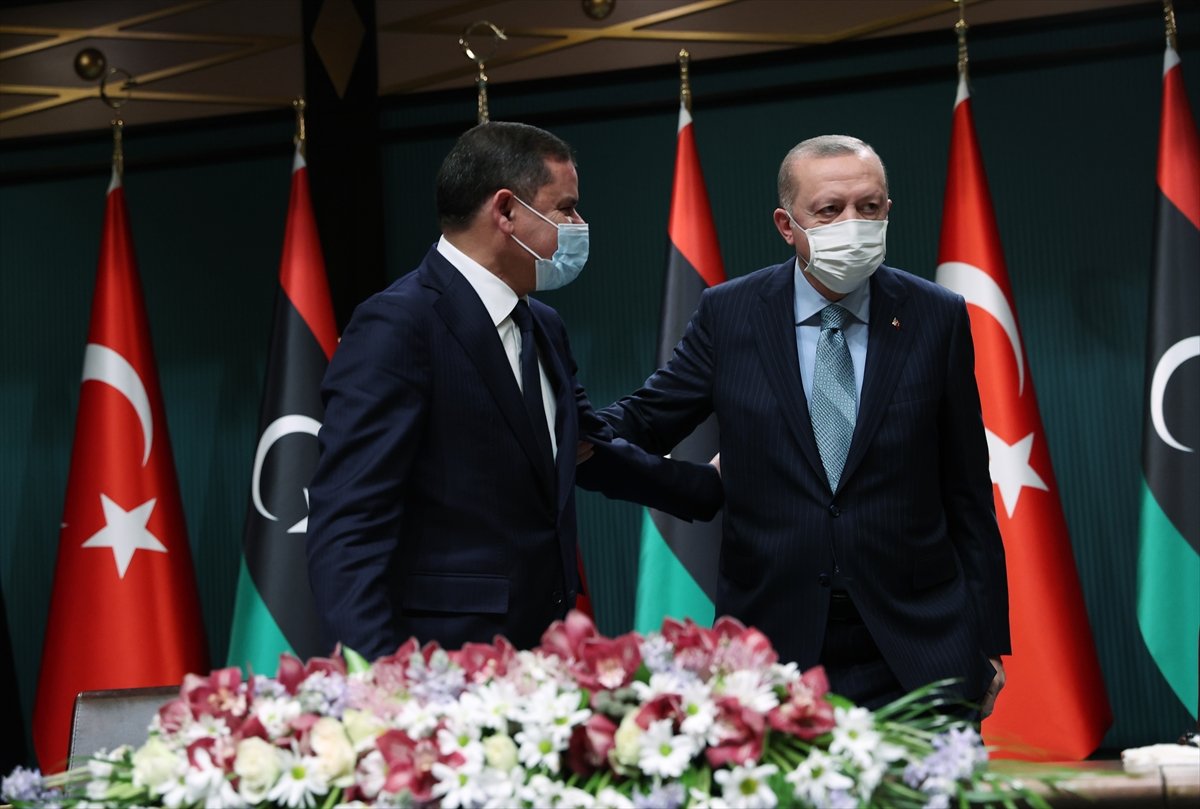 Erdoğan said Turkey will continue giving all support to Libya’s Government of National Unity, just as it gave to the previous legitimate government.

"Steps have been taken to accelerate the return of Turkish private sector to Libya," Erdoğan said, adding that Turkey will also deliver 150,000 doses of COVID-19 vaccine to Libya on Tuesday.

He stressed that a Turkish-Libyan deal on maritime jurisdictions signed in November 2019 helped secure both countries' national interests.

Erdoğan also urged the international community to give Libya genuine support to hold its elections on Dec. 24, as scheduled. 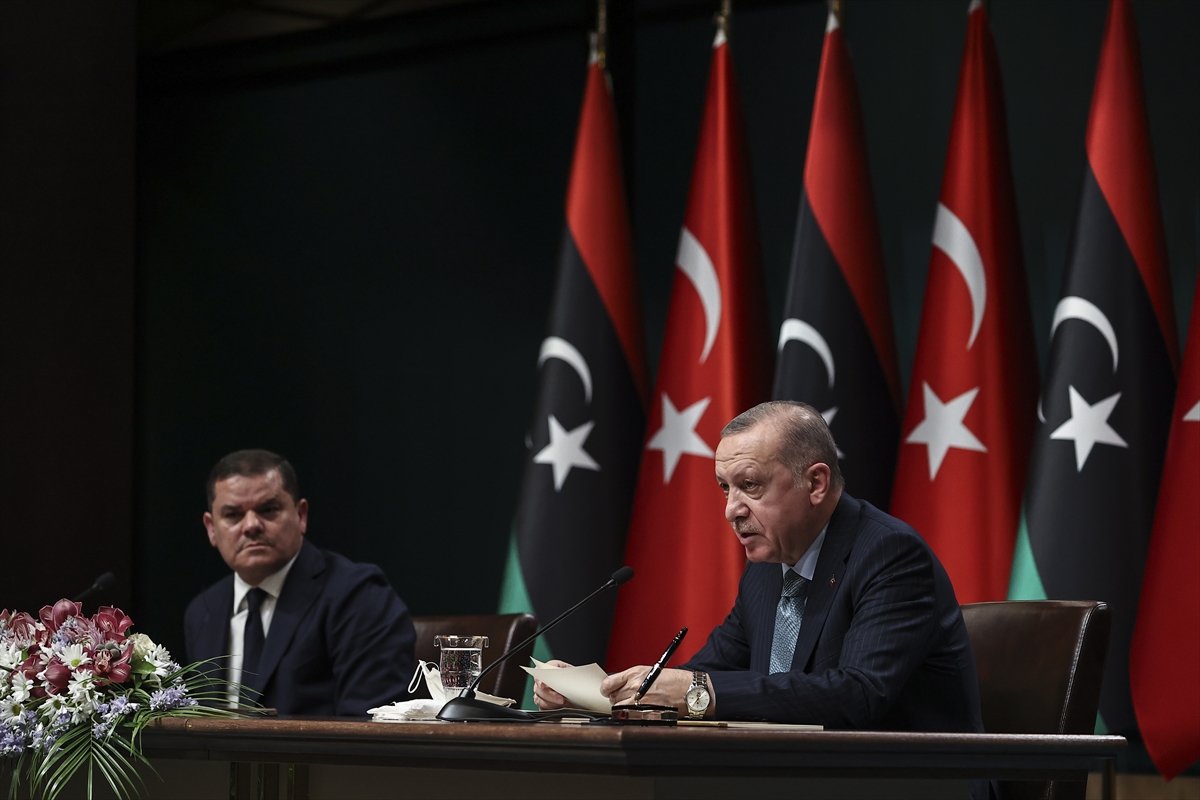 The statement said Libya’s only legitimate leadership structures are the Presidential Council and Government of National Unity chosen by elections.

The statement also declared Libya’s coordinated determination to carry out a political process leading to elections on Dec. 24, as scheduled.

The joint statement stressed the importance of Turkey's contributions to establishing and maintaining a permanent and sustainable cease-fire in Libya.

The statement also stressed the importance of holding a regional conference to support dialogue and cooperation in the Eastern Mediterranean to guarantee parties' rights. 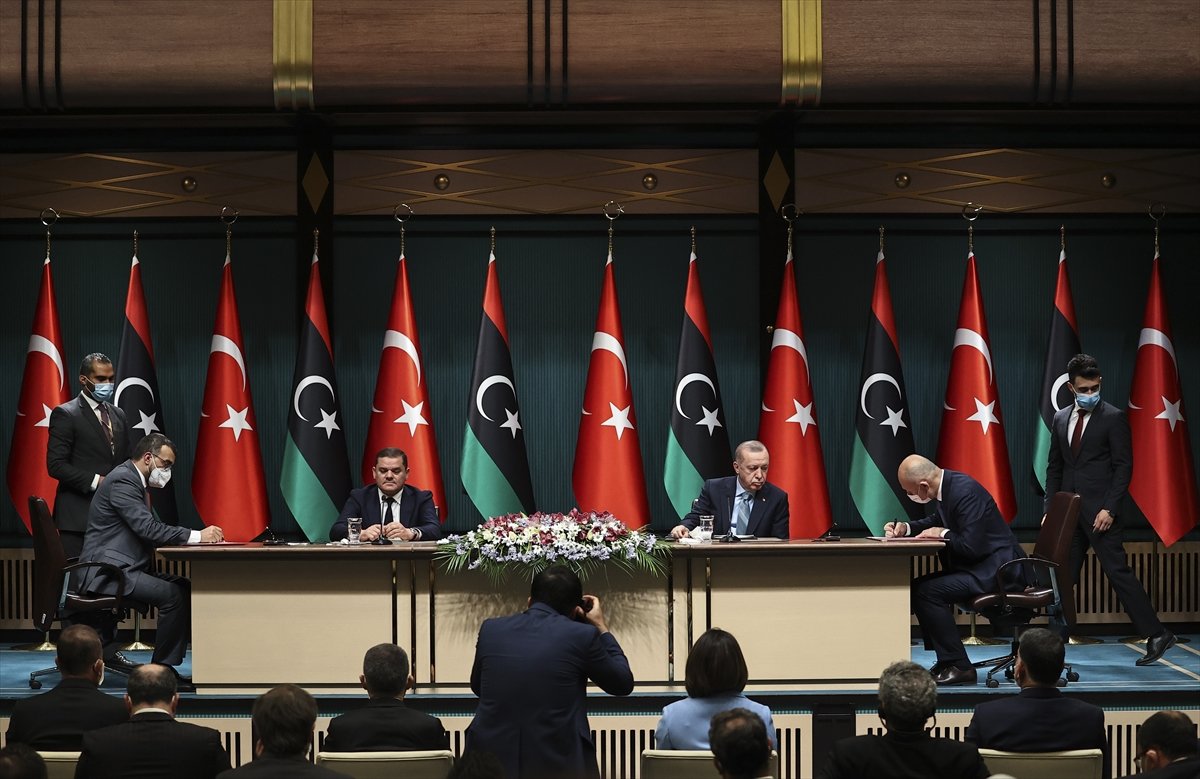 Libya's prime minister stressed the country’s keenness to enhance relations with Turkey to become a "positive example of what the relationship with Libya should be."

Speaking at a press conference in the Turkish capital Ankara alongside President Recep Tayyip Erdogan, Abdul Hamid Dbeibeh stressed that Monday’s meeting with Turkish officials was "very important, as it constitutes the start of the work of the joint strategic committee between two brotherly countries that share many in common."

"We are very pleased with the support shown by Turkey to cooperate in order to hold the elections on time and to assure that the problems in Libya can be solved through political methods with their known frameworks," he said, referring to elections set for Dec. 24.

"We stressed the importance of Turkey's role in implementing a permanent and sustainable cease-fire."

"Libya awaits great work in reconstruction and development, and it welcomes all Turkish companies and firms from friendly and brotherly countries to contribute to this matter," he said.

"Certainly, Turkish companies will be the most important of these companies for their long experience working in Libya, and we will work to address any obstacles in this regard." 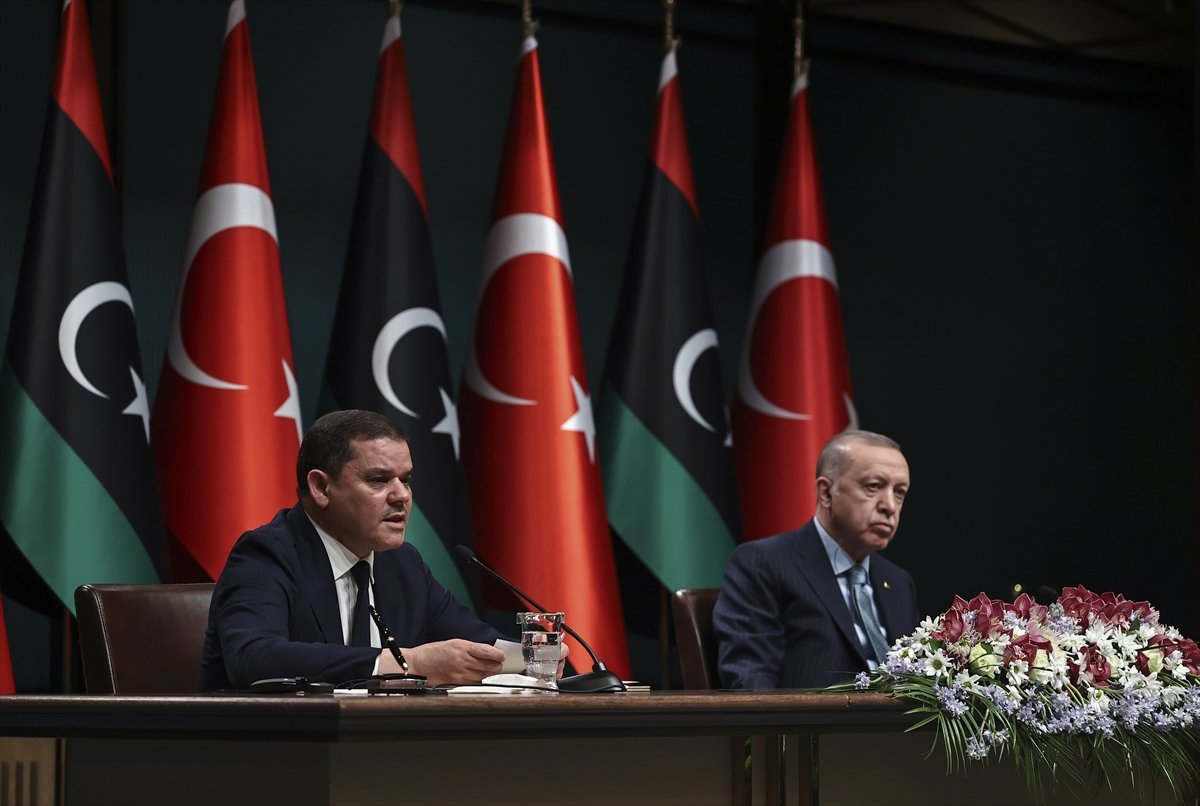 Dbeibeh also said both countries expressed willingness to cooperate in the energy sector and an understanding was reached to resume flights to Libya of national flag carrier Turkish Airlines.

Strengthening cooperation in healthcare was also among the topics discussed, especially in combating pandemics, and especially the coronavirus, he said.

"We hope that relations with brothers in Turkey will set a positive example of what the relationship with Libya should be and what can be achieved toward mutual benefit," he said, concluding his message with greetings to Turkey and the Turkish people on the occasion of the Muslim holy month of Ramadan.

Turkey's president on Monday welcomed the prime minister of Libya's Government of National Unity with an official ceremony in the capital Ankara.

Erdoğan and a senior Turkish delegation welcomed Dbeibeh and his high-level delegation – beginning a two-day official visit to Turkey – at the presidential complex. 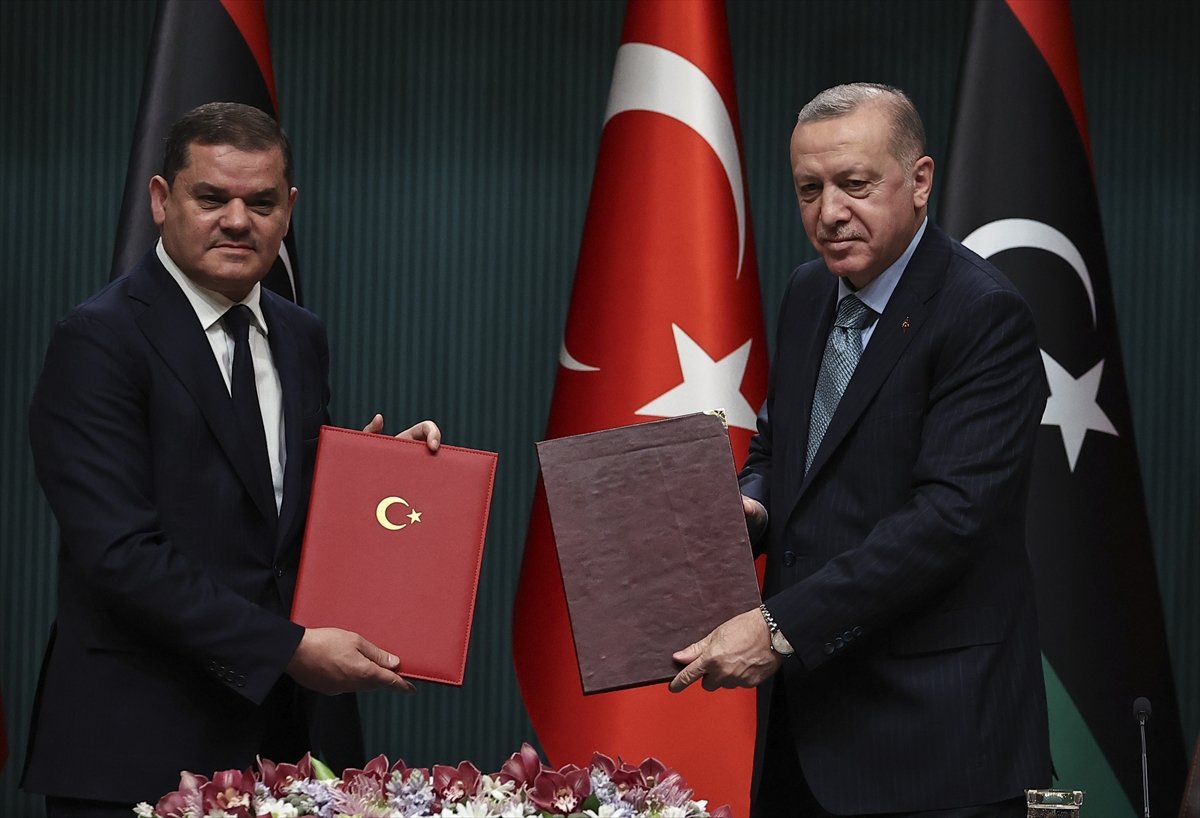 Turkey has long supported the efforts of the Government of National Unity to bring the country together. 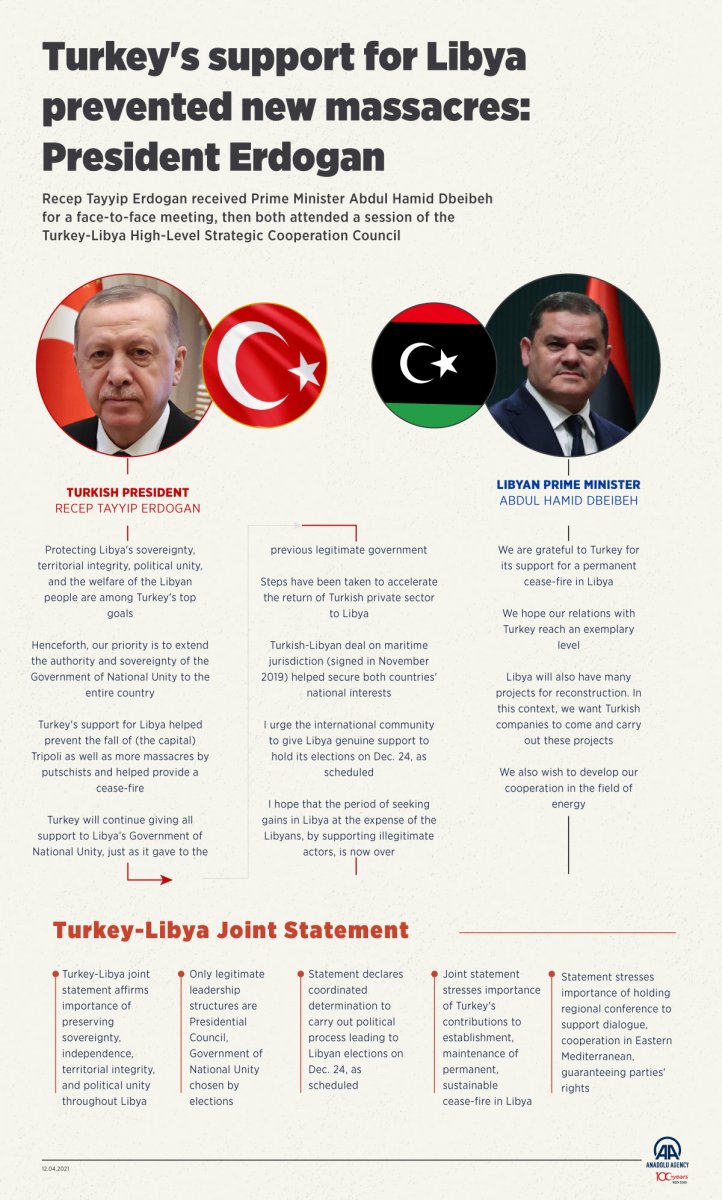