Prime Minister Theresa May promises to give a vote to MPs if she fails to reach a deal by Feb. 26.

British Prime Minister Theresa May asked for more time from lawmakers to carry on talks with EU leaders to convince them for changes into her withdrawal agreement on Tuesday.

In a statement she made to the House of Commons, May said the parliament needed to hold its nerve, adding that negotiations for possible changes to the Irish backstop with the EU are at a crucial stage.

“Having secured an agreement with the EU for further talks, we now need some time to complete that process,” the prime minister said. “The talks are at a crucial stage. We now all need to hold our nerve to get the changes this house requires and deliver Brexit on time,” she added.

May said she would update the parliament again on Feb. 26 and if she failed to get a new deal by that date, she promised to give lawmakers to have a say on next Brexit steps in non-binding votes. She said that she explained to EU officials that there are three ways to achieve a deal. "First, the backstop could be replaced with alternative arrangements to avoid a hard border between Northern Ireland and Ireland. Second, there could be a legally-binding time limit to the existing backstop. Or third, there could be a legally-binding unilateral exit clause to that backstop." she added. 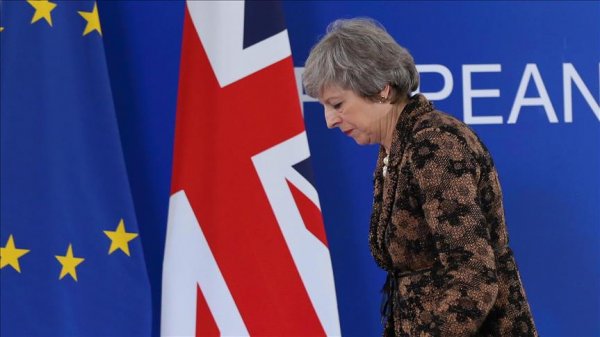 The leader of the main opposition party Jeremy Corbyn said the prime minister offered the parliament only "more excuses and more delays."

May had shown she only wanted to “deliberately run down the clock and play chicken with people’s livelihoods” by rejecting their idea of customs union membership, Labour leader Corbyn said.

May’s statement came following her meetings with EU leaders last week and they told her that they would not renegotiate the withdrawal agreement.

She is expected to meet EU’s top officials end of February.