US training of terrorists ‘not acceptable’ to Turkey, says DM

The US training of YPG/PKK terrorists is not acceptable to Ankara, Turkey’s defense minister Hulusi Akar said on Wednesday.

Speaking at an event in the capital Ankara marking Bosnia and Herzegovina’s Armed Forces Day, Hulusi Akar said Turkey is determined to protect its rights in land, seas and air.

Turkey has long criticized US cooperation with its “reliable” allies the PKK/YPG against Daesh, pointing out that the YPG is the Syrian branch of the PKK, a group recognized as terrorist by Turkey, the U.S., and the EU.

"Turkey will not let any terror corridor in country's south and Syria's north, including east of Euphrates river. So far Turkey has performed major fights against all terror organizations, PKK, YPG, Daesh, especially FETO, for peace in Turkey and the region and we will go on with our fight and operations with the same determination until the last terrorist is neutralized," Akar said. 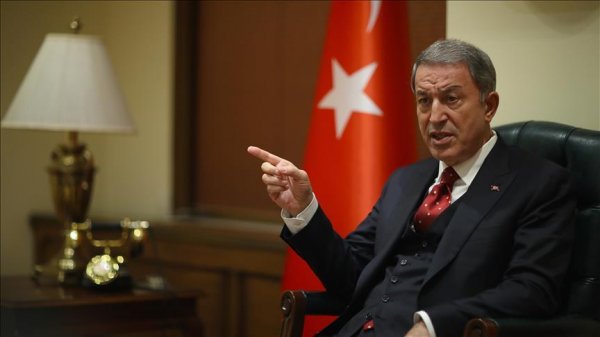 Akar also criticized the West for not extending necessary contributions to cope up with the human tragedies in Syria and Iraq. "Now we see that the world public opinion, which was deaf to the tragedy in Srebrenica, is now deaf to several similar tragic cases in Syria," he said and added that Turkey respects all its neighbors' territorial integrities, especially that of Syria and Iraq.