Sympathizers of the PYD/PKK terror group continued their smear campaign on social media against Turkey's anti-terror operation in northern Syria.

YPG/PKK-affiliated social media accounts have been spreading misleading and irrelevant images of burned or burning military vehicles and tanks, framing them as belonging to the Turkish Armed Forces amid the country's ongoing Operation Peace Spring, which seeks to eradicate a terror corridor in its southern border and bring stability to the region.

A photo -- posted by a pro-PKK/YPG social media account -- showing a burning tank was posted as if taken during the operation. It was actually found to have been taken in Iraq in 2003. 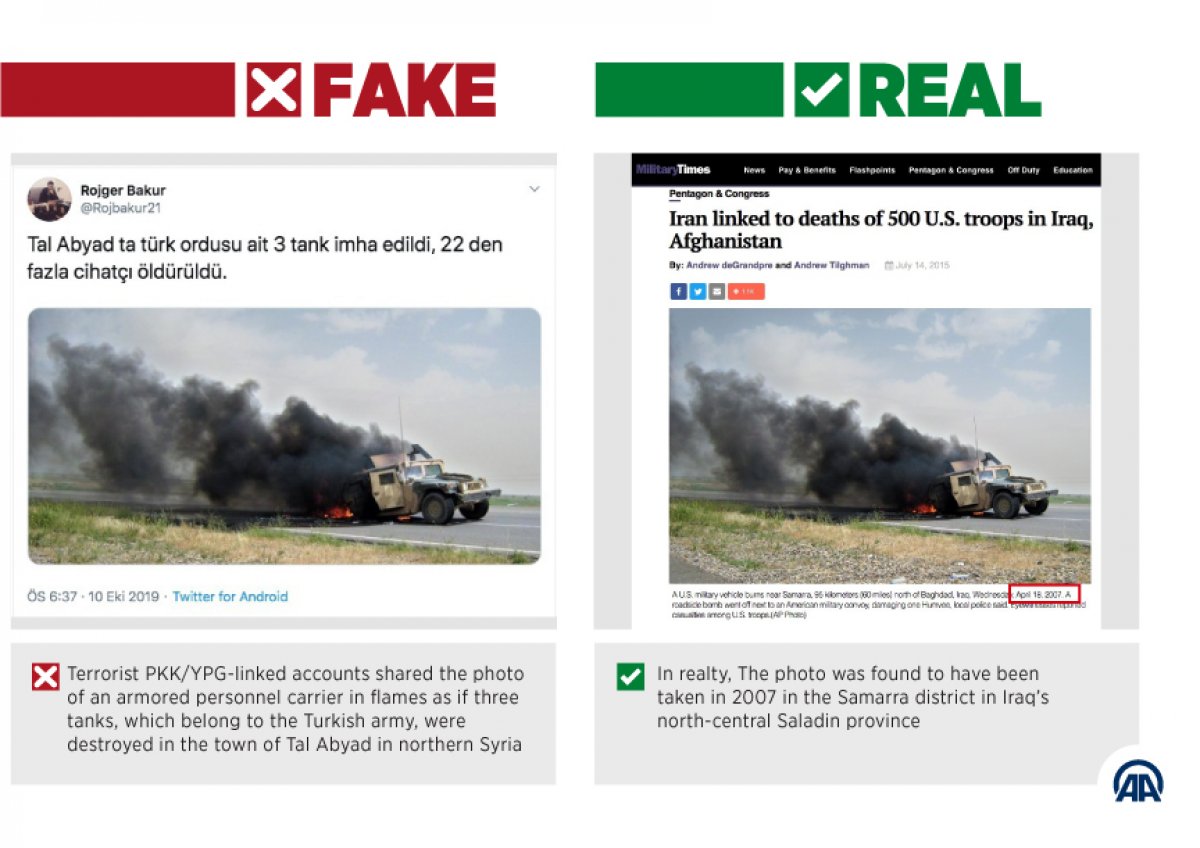 Another pro-PKK/YPG account published a similar photo of another Iraqi tank, which had been taken in 1991 in Kuwait during the First Gulf War, to smear Turkey’s peace operation. 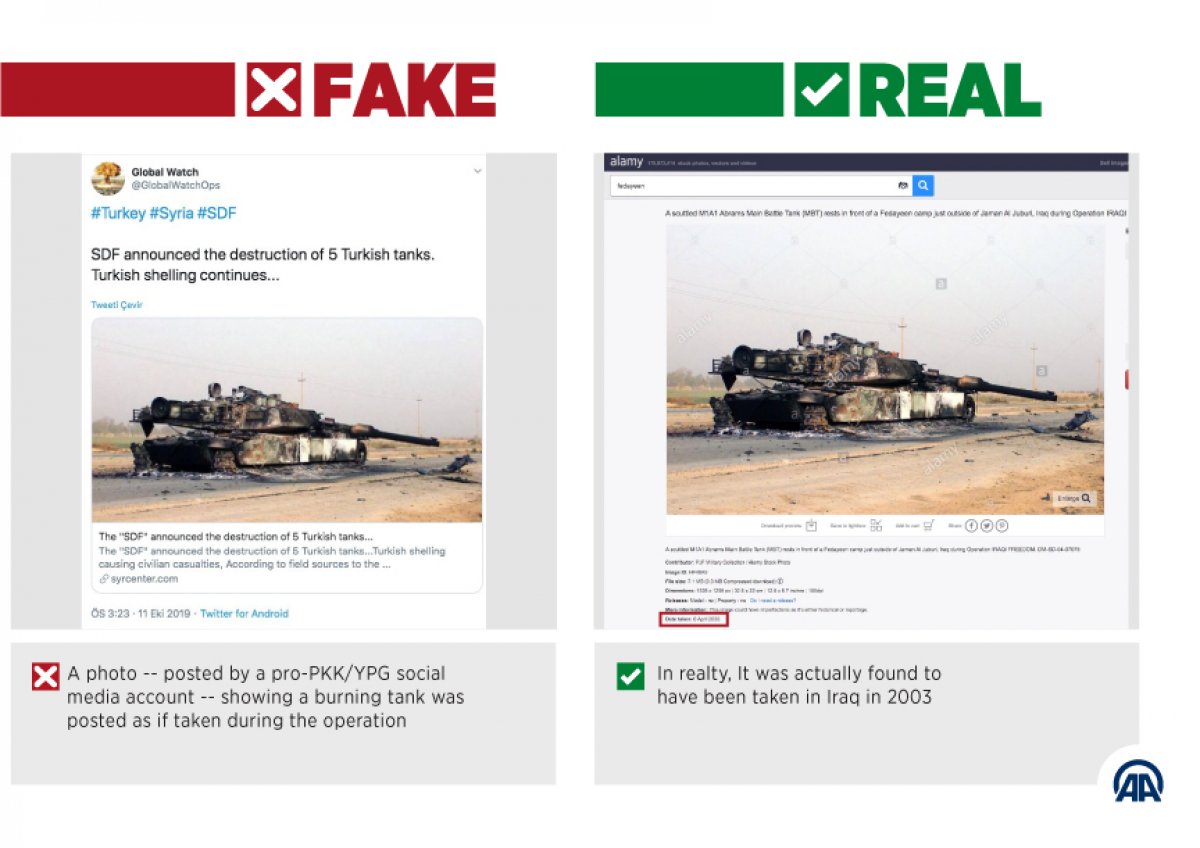 In another example, a manipulator social media account used the photo of an armored personnel carrier in flames as if three tanks, which belong to the Turkish army, were destroyed in the town of Tal Abyad in northern Syria. The photo was found to have been taken in 2007 in the Samarra district in Iraq’s north-central Saladin province. 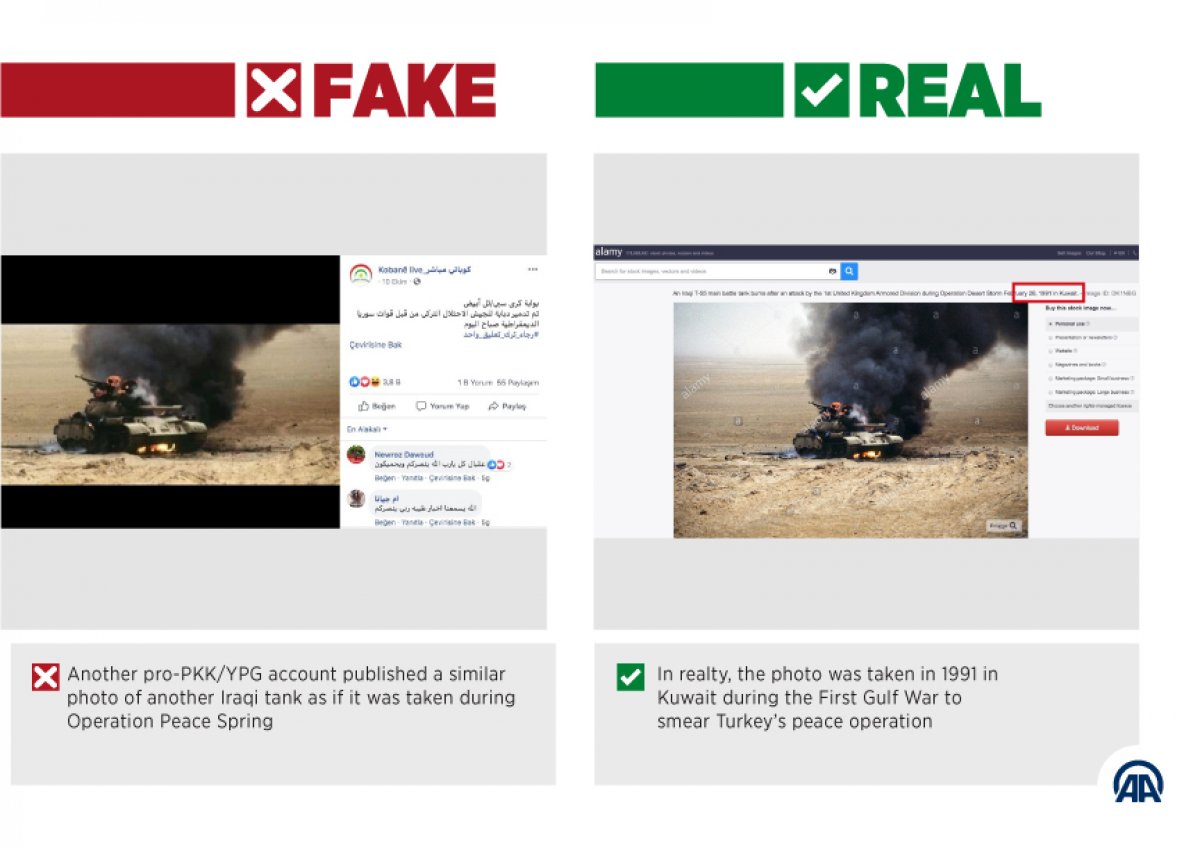 A photo of a tank in flames taken in Syria in 2012 was also used as if it was taken in northern Syria during Turkey's operation. 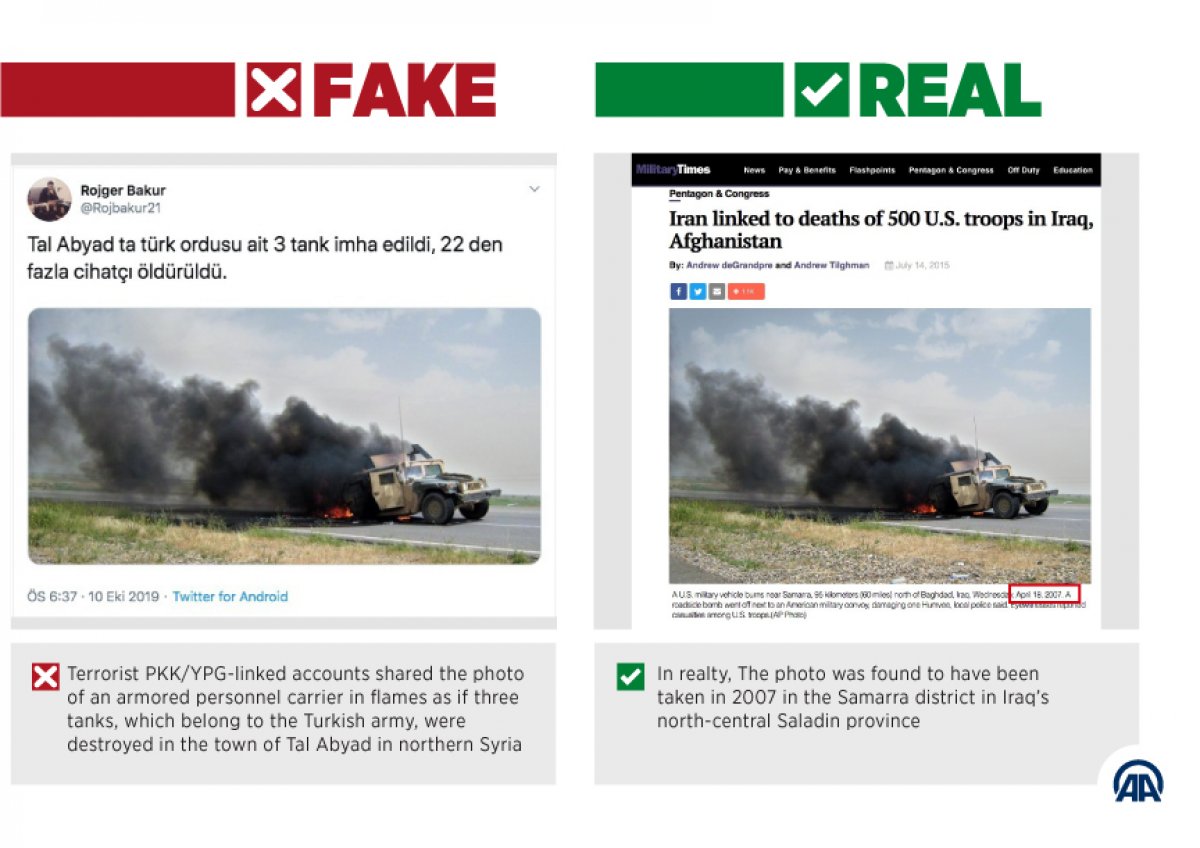 Another terror-linked social media account tried to manipulate public opinion with another image of a tank in flames, claiming it was taken during Operation Peace Spring. The photo was found to have been taken in 2012 in Syria. 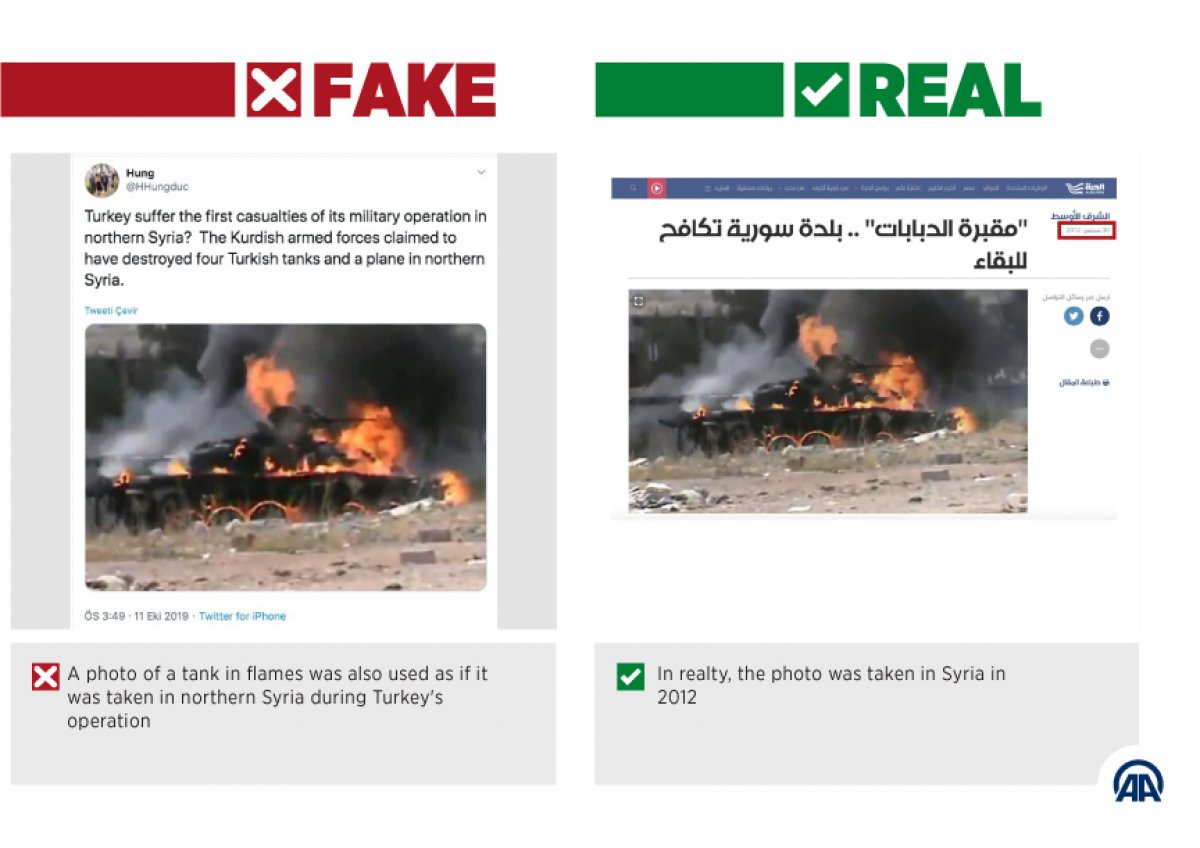 Pro-YPG/PKK social media accounts also used a photo of burned armored vehicles as if taken during Operation Peace Spring, which was false as the photo was taken in Yemen in Sep. 2. 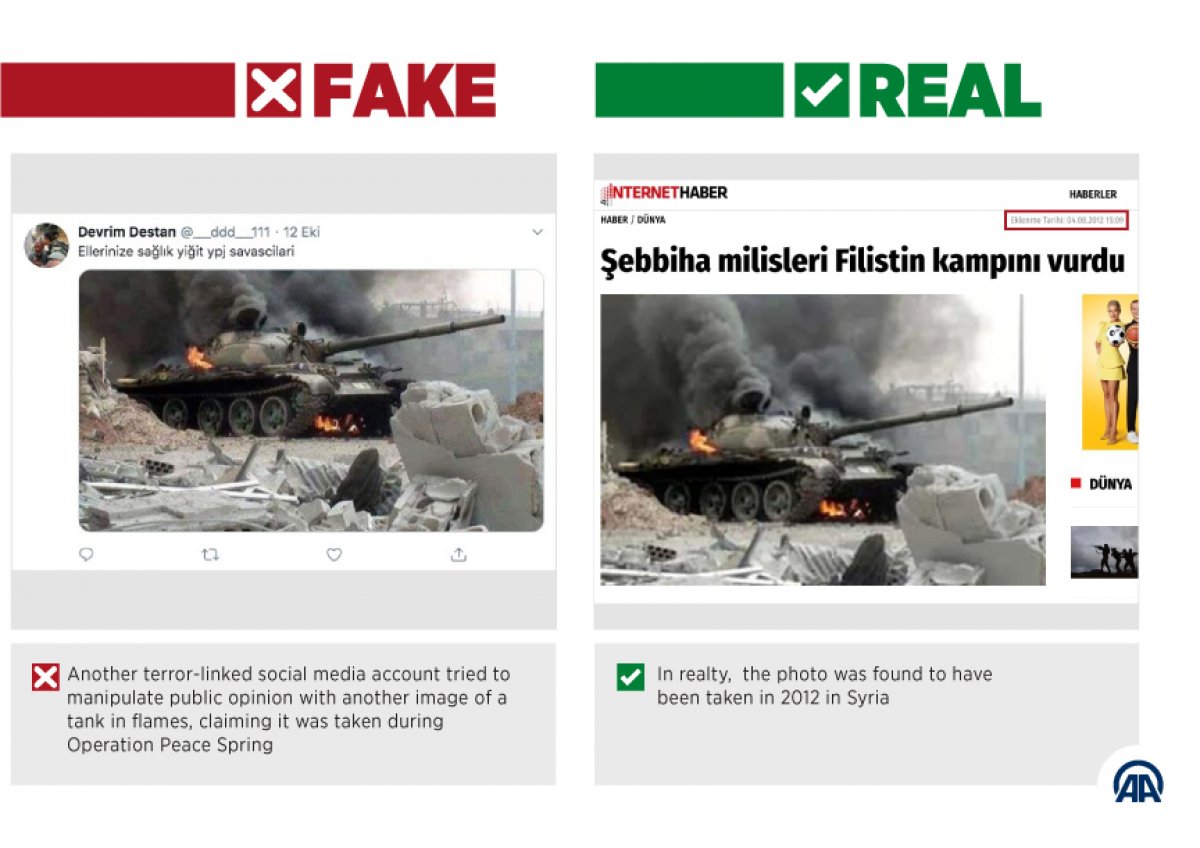