James Jeffrey said he came to Ankara to re-evaluate the situation with the Turkish government, adding that the US will give as much as possible support to Turkey.

The US special envoy for Syria visited Turkey on Tuesday to re-evaluate the recent developments in the region.

He also extended condolences to the country for the martyred Turkish troops by the regime attacks in Idlib earlier Monday.

Accompanying Jeffrey, the ambassador's senior advisor Rich Outzen said the US "strongly condemned the attacks of the Damascus regime."

Stressing the importance of solidarity, Outzen said his country will continue to be in close contact with Turkey.

“In Ankara, Ambassador Jeffrey will meet with senior Turkish officials to discuss the Assad regime’s Russian-backed destabilizing military offensive in #Idlib and how we can work together toward a political solution to the Syrian Conflict,” the US Embassy in Turkey said on Twitter earlier. 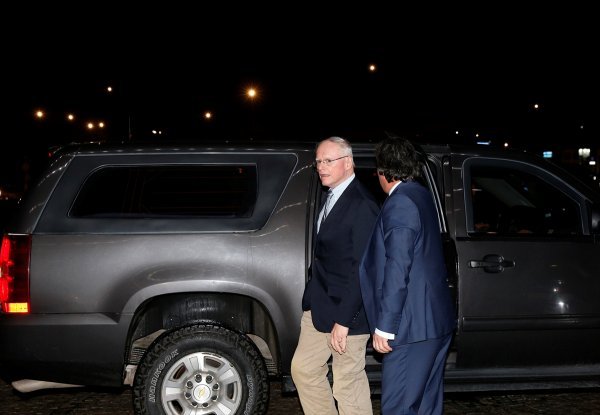 “The destabilizing actions of Russia, the Iranian regime, Hizballah & the Assad regime are hindering the establishment of a nationwide ceasefire in Syria as called for an UNSCR 2254 & the safe return of hundreds of thousands of displaced persons in northern Syria to their homes,” it added.

The embassy also called for “an immediate ceasefire and full access to the affected areas by humanitarian organizations to alleviate the suffering of the hundreds of thousands that have fled the incessant bombing.”