Delivering his threat in a tweet Tuesday, Graham said congressional action would be wide, deep, and devastating against Turkey.

US Senator Lindsey Graham on Tuesday threatened Turkey to impose "sanctions from hell" if Ankara enters Syria following Trump’s announcement that he would pull US forces out of a crucial buffer zone along the border between the two nations.

"If Turkey moves into northern Syria, sanctions from hell – by Congress – will follow,” the South Carolina Republican threatened Turkey in a tweet. “Wide, deep, and devastating sanctions," he added. 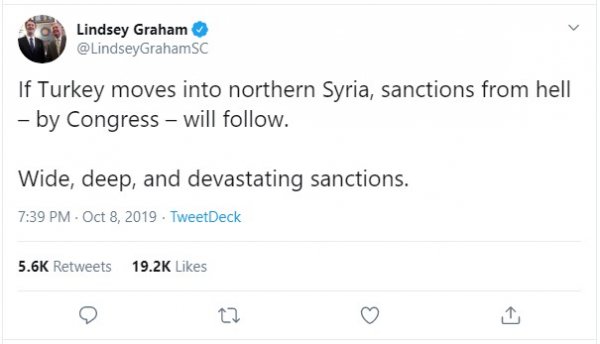 The threat comes just two days after the Trump administration announced it would step aside as Turkey gears up to move into the region, leaving American-allied Kurdish fighters to fend for themselves.