US condoles with Turkey after Assad regime's attacks

The US on Monday voiced solidarity with Turkey after Syrian regime strikes martyred over a half-dozen Turkish troops and injured several more.

"WE ARE CONSULTING WITH TURKISH GOVERNMENT"

"We stand by our NATO ally Turkey against these actions, send condolences to the Turkish government on the deaths of their people and fully support Turkey’s justified self-defense actions in response," a State Department spokeswoman told Anadolu Agency on condition of anonymity.

"We are consulting with the Turkish government on this matter," she added.

The deadly attacks in northwestern Syria's Idlib province martyred seven Turkish soldiers and one civilian contractor working with the Turkish military. Thirteen other individuals were injured but are in good condition, according to Turkish Defense Minister Hulusi Akar. 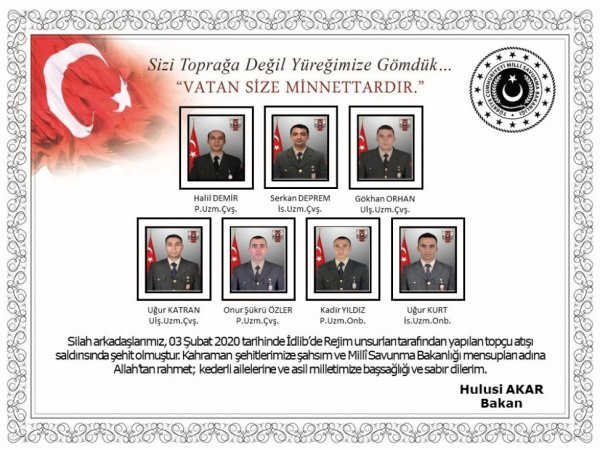 "The destabilizing actions of Russia, the Iranian regime, Hezbollah and the Assad regime are hindering the establishment of a nationwide ceasefire in Syria as called for in UNSCR 2254 and the safe return of hundreds of thousands of displaced persons in northern Syria to their homes," the spokeswoman said, referring to a 2015 UN Security Council resolution that called for a ceasefire in Syria and a political settlement of the conflict

"The United States will do all in its power to block any reintegration of the Assad regime into the international community until it complies with all provisions of UNSCR 2254, including a nationwide ceasefire which incorporates Idlib," she added.