The Joint Operations Center, to coordinate actions in the Syria safe zone, will start functioning from next week, Turkish Defense Minister Hulusi Akar announced on Friday.

Akar along with Chief of General Staff Yasar Guler, and commanders of the land, air, and naval forces visited the southeastern city of Sanliurfa, to inspect troops preparing to set up a Turkish-US Joint Operations Center.

TWO COUNTRIES HAVE AGREED ON MANY THINGS

Akar said that the timetable for establishment of the Center was implemented smoothly and as per schedule so far. He also stressed that Turkey and the US have agreed on many things, including the control and coordination of Syria safe zone airspace. 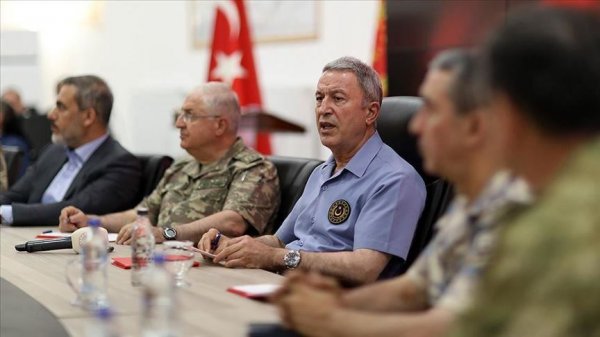 Akar, however, criticized the US for cooperating with the YPG terrorists.

He urged the US, who is also Turkey’s ally, to end this cooperation as soon as possible.

Turkish and US military officials on Aug. 7 had agreed to set up a safe zone and develop a peace corridor to facilitate the movement of displaced Syrians, who are longing to return to their homes. They also agreed to establish a joint operations center.