Hulusi Akar accompanied by the Turkish chief of General Staff, commander of the Turkish Land Forces.

Turkey's defense minister is carrying out an inspection of troops deployed along the country's border with Syria, the Defense Ministry said on Saturday.

THE CREATING TERRORIST ROUTERS WILL NOT BE ALLOWED

In a statement, the Defense Ministry said Hulusi Akar was accompanied by Turkish Chief of General Staff Yaşar Güler and Ümit Dündar, commander of the Turkish Land Forces. 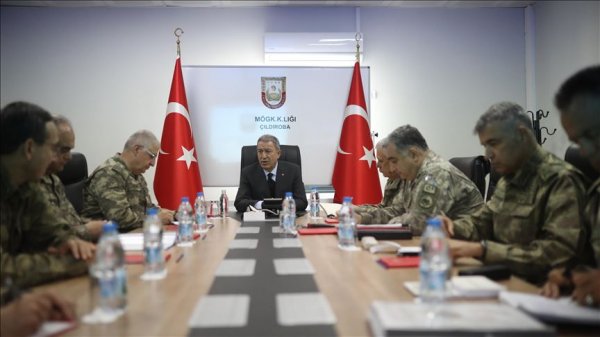 They also met the commanders of troops stationed on the border. Turkey has stressed that it will not allow the formation of a terrorist corridor along its southern border with Syria, and towards that end has promised a counter-terrorist operation east of the Euphrates in Syria.

The expected operation would follow up on two other successful Turkish counter-terrorist operations in Syria since 2016, Operation Euphrates Shield and Operation Olive Branch.