Turkish Cypriot rights' are under the guarantee of Turkey, says defense minister

Turkey is the most powerful guarantor of peace and stability in the region, Turkish Defense Minister Akar said.

Ankara will never tolerate a usurpation of the rights of Turkey and Turkish Cypriots with a fait accompli, the country's defense minister said on Thursday.

Speaking at a ceremony for the 55th Anniversary of Erenkoy Resistance on Cyprus, Hulusi Akar said Turkey and the Turkish Cypriots reached their hands out for peace and stability. 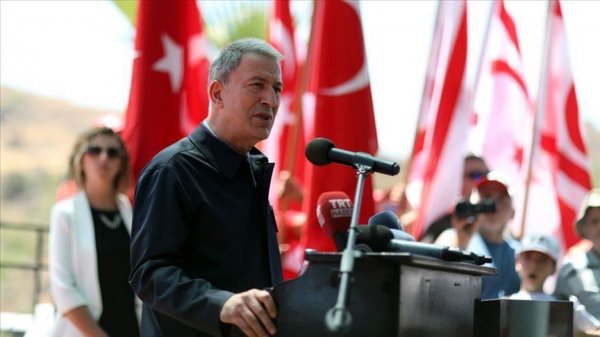 "We are awaiting an answer to this hand. We hope that all relevant parties, especially the Greek Cypriots, understand our conciliatory and sincere approach and respond in kind," Akar said, adding that they hoped that in this way, new "stories of peace" could be written on the island.

He underlined that Ankara would continue to protect the legitimate rights and interests of both Turkey and the Turkish Republic of Northern Cyprus under international law, in accordance with guarantee and alliance agreements.