Turkey’s Defense Minister is at the border of Syria

Defense Minister Hulusi Akar says Turkey determined to end terrorism wherever it may be.

Turkey's preparations for a possible operation in Syria in the east of Euphrates continue "intensely", the defense minister said on Friday.

“WE HAVE NO PROBLEMS WITH OUR KURDISH BROTHERS”

"We have Manbij and the east of the Euphrates ahead. Necessary planning was made regarding this. Our preparation continues intensely," Hulusi Akar said while inspecting troops near the border with Syria. Akar said Turkey was determined to end terrorism wherever it may be. "We have no problems with our Kurdish brothers, Arab brothers in Syria, Turkmens and other ethnic and religious groups. Our only targets are terrorists Daesh and PKK/YPG," he added. 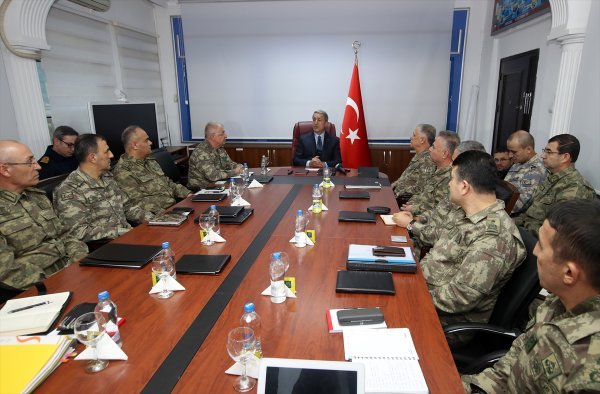 A mission east of the Euphrates River, which Turkey’s leadership has been suggesting for months, would follow two successful cross-border Turkish operations into Syria since 2016 -- Operations Euphrates Shield and Olive Branch -- both meant to eradicate the presence of YPG/PKK and Daesh terrorists near Turkey’s borders.