Turkey, US had ‘productive’ talks on Syria: US official

US looks forward to 'ongoing military-to-military consultations' on cooperation in Syria, US official says.

Following a meeting between Turkish and US delegations, Washington’s National Security Council spokesman said the two sides had a “productive discussion.” 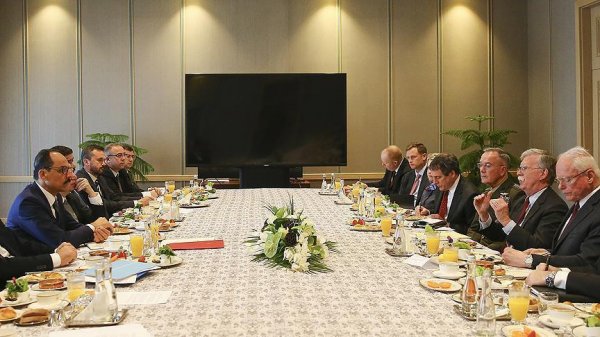 Marquis said that the “strong bilateral relationship” between the two countries was emphasized during the meeting. “The US looks forward to ongoing military-to-military consultations today on our cooperation in Syria,” he said.

The talks between senior military, intelligence and diplomatic officials on both sides took place at the Presidential Complex in Ankara on Tuesday, lasting around two hours.

Bolton departed from the Turkish capital later on Tuesday, while other major figures -- including US Chairman of the Joint Chiefs of Staff Gen. Joseph Dunford and Special Envoy for Syria James Jeffrey are still in Ankara.