Erdoğan and Guterres attended the signing ceremony with Ukrainian and Russian delegates.

Turkey, the UN, Russia, and Ukraine on Friday signed a deal in Istanbul to resume Ukraine’s Black Sea grain exports.

Turkish President Recep Tayyip Erdoğan and UN Secretary-General Antonio Guterres attended the Signature Ceremony of Initiative on the Safe Transportation of Grain and Foodstuffs from Ukrainian Ports Document at the Dolmabahçe Palace along with representatives from Russia and Ukraine.

"We are proud of being instrumental in an initiative that will play a major role in the solution of the global food crisis that has occupied the whole world for a long time," Erdoğan said.

The president added: "We will contribute to preventing the danger of hunger that awaits billions of people in the world.

He noted that by the ship traffic that will start in the coming days, "we will inaugurate a new corridor from the Black Sea to many countries in the world." 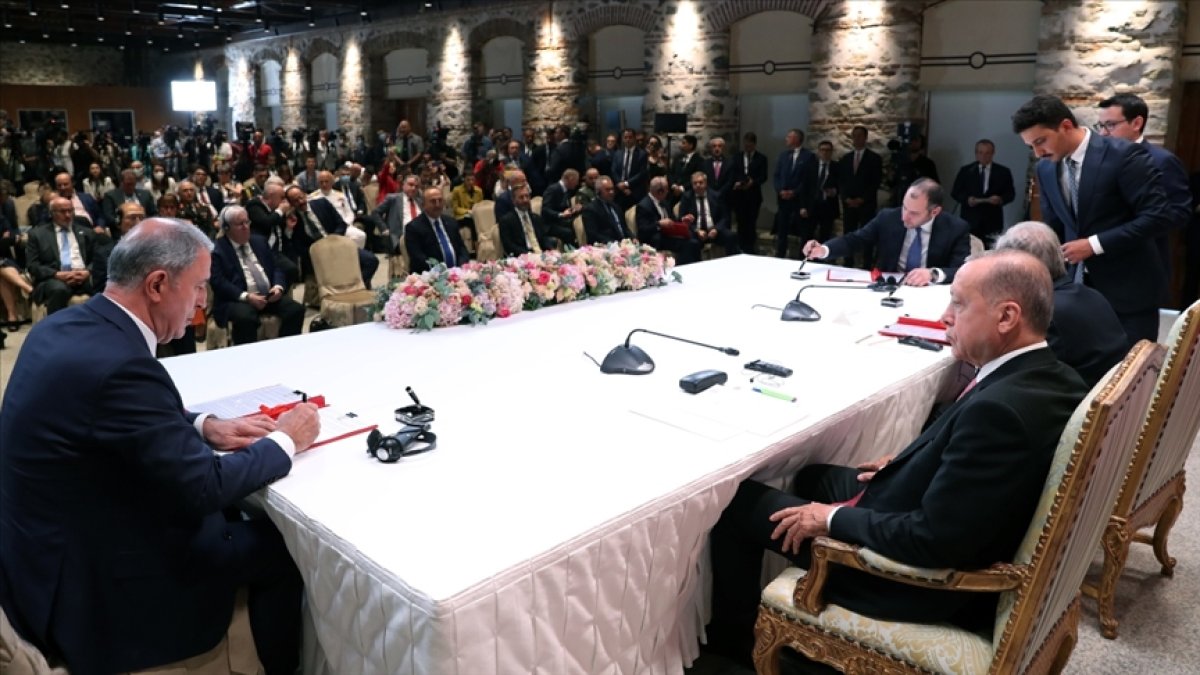 The president also said the agreement has been made on all processes from the departure of the ships to their safe passage as well as arrival at the port of destination.

"The implementation and supervision of this highly important plan will be carried out by the joint coordination center to be established in Istanbul," he added.

The deal came after a general agreement was reached between the parties on a UN-led plan during talks in Istanbul on July 13 to form a coordination center to carry out joint inspections at the entrance and exit of the harbors, and to ensure the safety of the routes.

Internationally praised for its mediator role, Turkey has coordinated with Moscow and Kyiv to open a corridor from the Ukrainian port city of Odesa to resume global grain shipments which are stuck due to the Russia-Ukraine war, now in its fifth month. 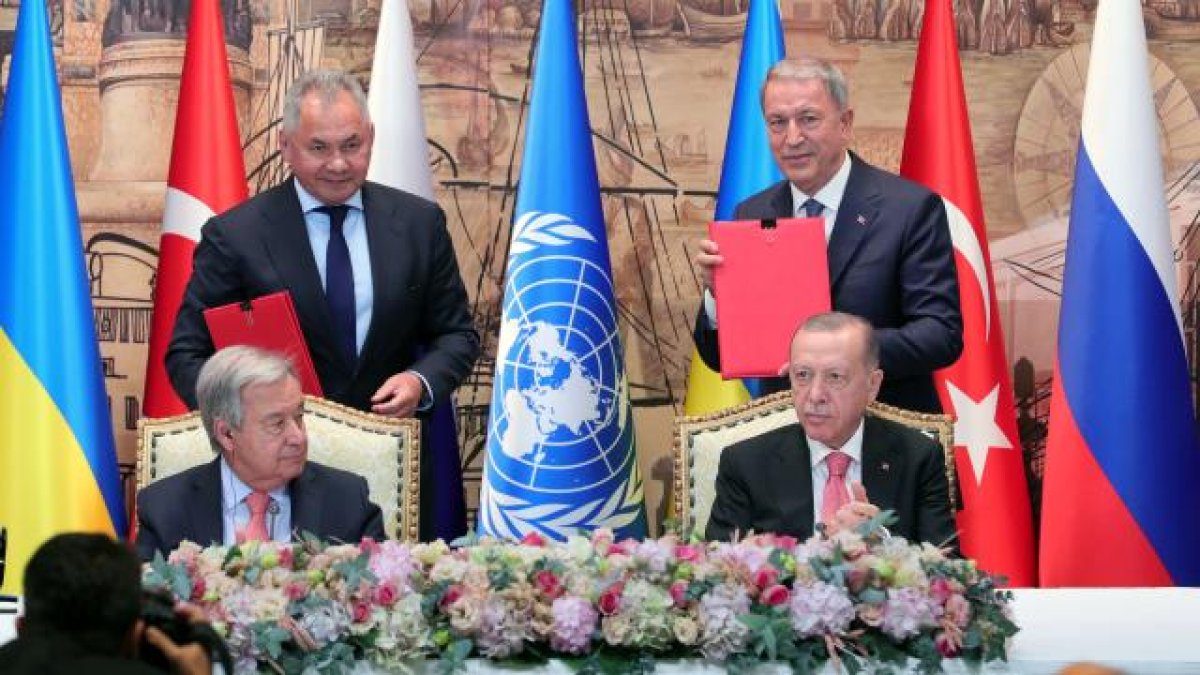 Erdoğan also called on Russia and Ukraine to end the ongoing five-month-old war, saying: "I wish that this joint step we are taking in Istanbul with the Russian and Ukrainian sides will be a new milestone that will revive hopes for peace."

Speaking ahead of the ceremony, Guterres thanked Turkey for its “facilitation and persistence” in the signing of the grain deal.

This initiative must be fully implemented because the world so desperately needs it, the UN chief stressed, calling the deal a “beacon of hope in the Black Sea.”

“Since the war started, I have been highlighting that there is no solution to the global food crisis without ensuring full global access to Ukraine’s food products and Russian food and fertilizers,” he added.

Guterres, for his part, said on Twitter that the agreement "will help avoid a food shortage catastrophe for millions worldwide," adding: "It is a beacon of hope, possibility & relief." 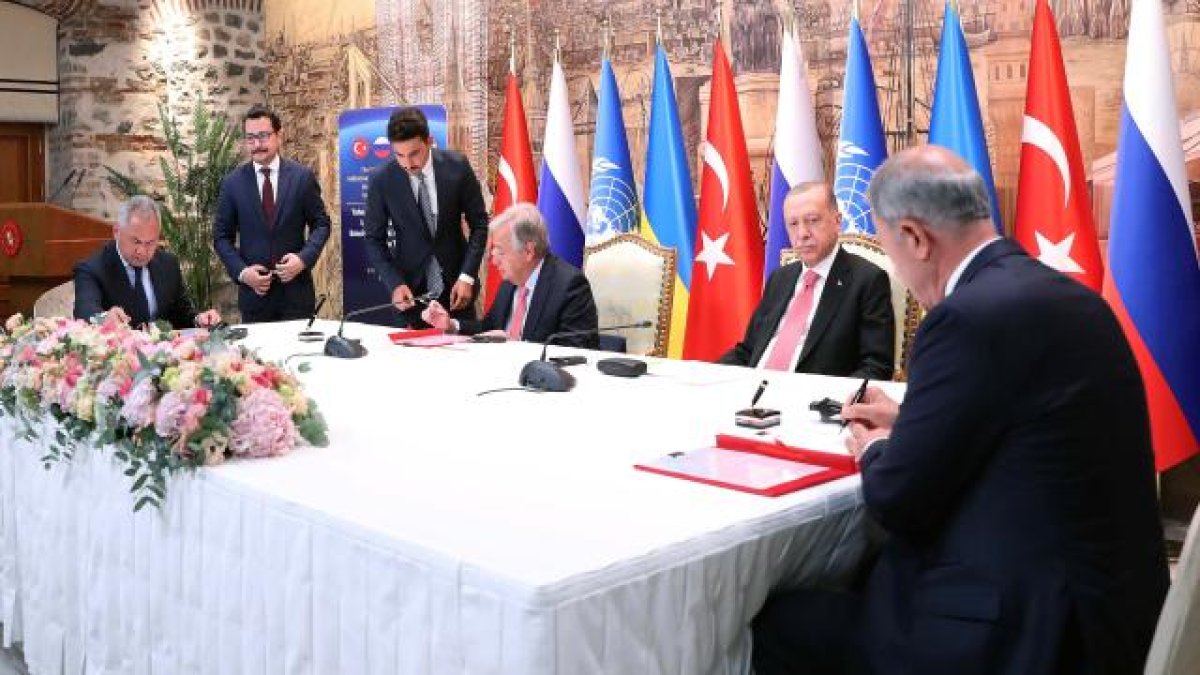 Turkish Foreign Minister Mevlüt Çavuşoğlu met with Guterres on the sidelines of the signing ceremony. “Discussed Syria, Libya and particularly the latest developments in Ukraine,” Çavuşoğlu said on Twitter.

Akar told Shoigu that an immediate cease-fire needs to be achieved in Ukraine.