On Saturday, The US Embassy in Ankara shared an apology message on Twitter over the incident.

On Saturday, the official Twitter account of the US Embassy in Turkey liked a Twitter message by Ergun Babahan, a Fetullah Terrorist Organization (FETO) member who fled Turkey following the July 15 coup attempt in 2016, which left 251 people martyred and nearly 2,200 injured.

Presidential Communications Director Fahrettin Altun said "the U.S. Embassy 'liked' a message by a FETO-linked figure claiming [MHP leader Devlet] Bahceli's 'end is near'." "Freudian slip? The US Embassy has no business meddling in Turkey’s domestic affairs," Altun said, urging the U.S. Department of State to investigate the incident. Babahan’s tweet came amid rumors about the health of Bahceli, who was hospitalized for nausea last week, but discharged after a brief treatment. 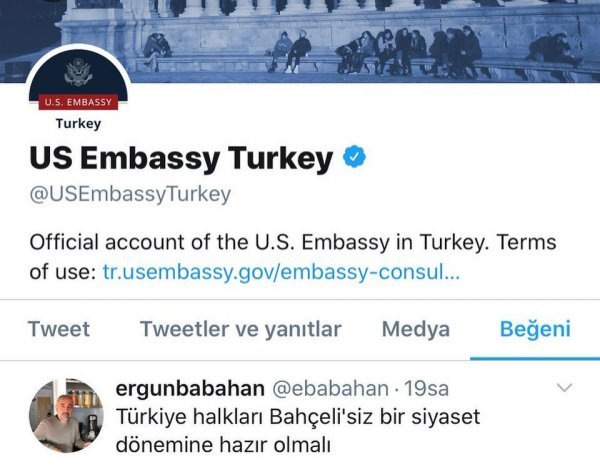 Also, the ruling Justice and Development (AK) Party spokesman Omer Celik criticized the embassy move. “We strongly condemn the U.S. Embassy ‘like’ on MHP leader Devlet Bahceli’s health, which is unacceptable humanistically and against diplomatic practices,” Celik said on Twitter.

He called it “an attempt to intervene in Turkish domestics affairs,” calling on the US Department of State and the U.S. Embassy in Turkey to probe the incident.