Turkey’s presidential spokesperson on Wednesday condemned a statement by the European Union’s lead spokesperson for external affairs over the EU’s support for a Turkish opposition party.

"For once, you could perhaps be concerned about the PKK, a terrorist organization on the EU list, which brutally executed 13 people in Gara, Iraq. Or would that get you into trouble with the PKK lobby?," Ibrahim Kalin said on Twitter regarding Peter Stano's statement.

"The European Union is gravely concerned about the continuing pressure against the HDP and several of its members, which has materialized lately through arrests, replacing elected mayors, what seem to be politically motivated judicial proceedings and the attempt of lifting parliamentary immunities of Members of the Grand National Assembly," Stano's statement said, referring to the Peoples’ Democratic Party (HDP).

In 2014, encouraged by developments in northern Syria, the terrorist group PKK adopted a new strategy in Turkey and sought to weaken the Turkish state by disrupting its unity in an effort to gain territory in line with its separatist agenda. 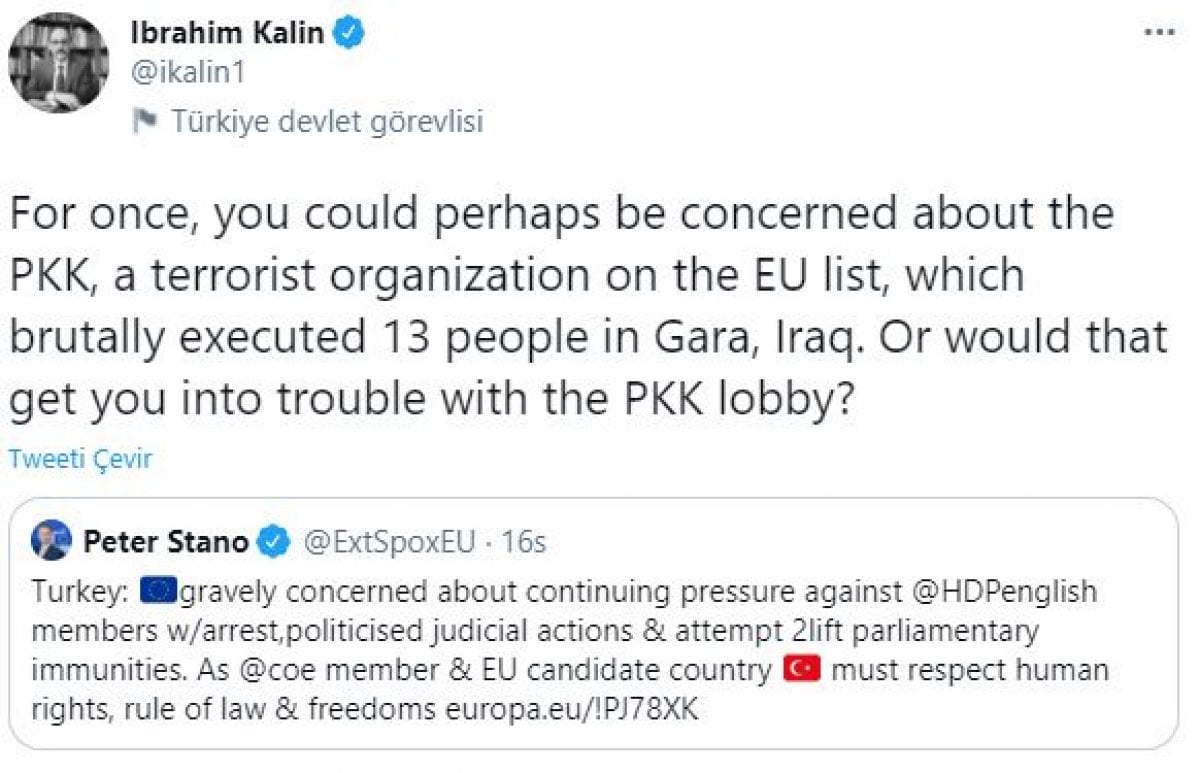 On Oct. 6-8 of that year, PKK ringleaders and their supporters incited armed violence across the country, instructing militants, terrorists and ideological supporters to take to the streets and rebel against the Turkish state under the pretext of a Daesh/ISIS attack on the Syrian border city of Ayn al-Arab (Kobani).

The HDP -- a party Turkey has said is linked to the terrorist PKK -- also made a statement calling on people to take to the streets in protest.

The call to protest led to violent events in 35 provinces and 96 districts, causing the deaths of 37 citizens -- including civilians distributing humanitarian aid during a Muslim holiday -- and injuries to 761 people, including 326 law enforcement officers.

In its more than 35-year terror campaign against Turkey, the PKK -- listed as a terrorist organization by Turkey, the US and the EU -- has been responsible for the deaths of at least 40,000 people, including women, children and infants.