Turkey on Saturday commemorated martyred diplomats who were assassinated by Armenian terror organizations since the 1970s.

"Lies do not only distort history, but they also take innocent lives," said the Turkish Foreign Ministry said on Twitter, adding, "We have not forgotten our colleagues who were martyred by the Armenian terror, we will never forget."

The ministry also said, "Let them sleep well. We will not bow to any lies or pressure."

Commemorating the martyred diplomats and all Turkish martyrs, Deputy Foreign Minister Yavuz Selim Kiran said on Twitter, "Those making political distortions against historical facts on 1915 events can neither make people accept the so-called genocide slanders nor make us forget the ASALA terror." 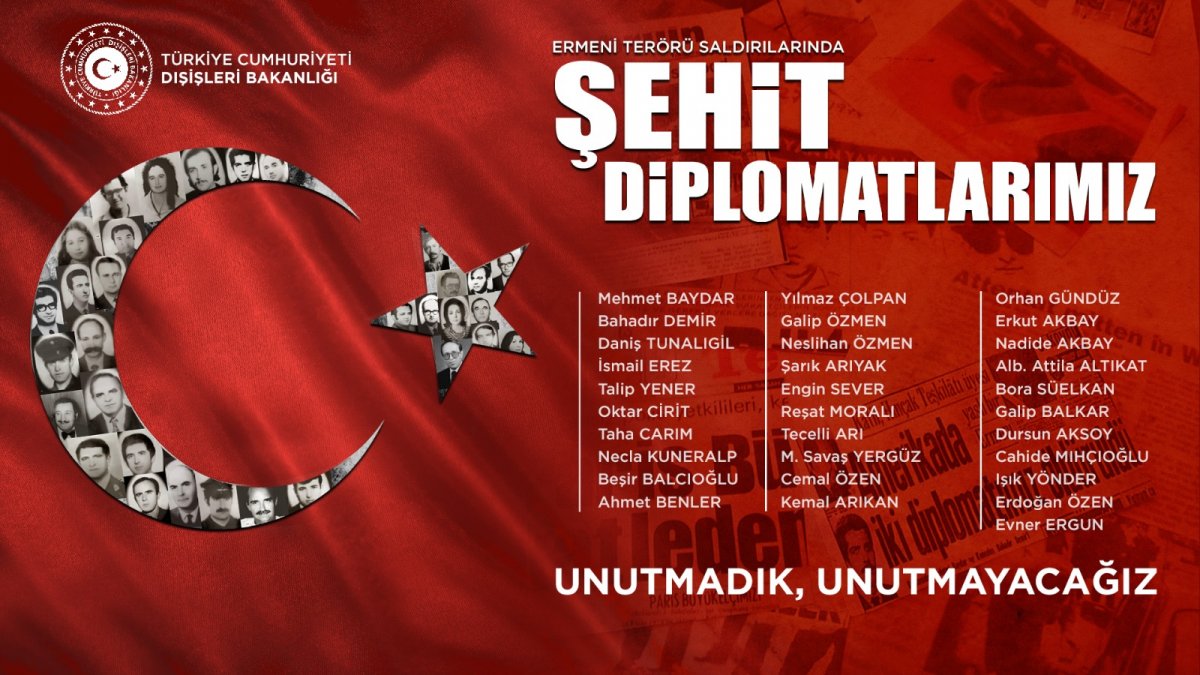 He also shared a video about the diplomats adding, "We did not and will not forget."

Ibrahim Kalin, presidential spokesman, also commemorated the martyred diplomats saying, "We know who backed this atrocity by hiding behind the genocide lie."

He stressed that Turkey would continue to use the language of truth against those who distort historical facts and share an image with the Turkish flag and names of martyred diplomats.

According to data compiled by Anadolu Agency, a total of 77 people -- 58 of them Turkish citizens, including 31 diplomats and members of their family -- lost their lives in attacks carried out by Armenian terror organizations. 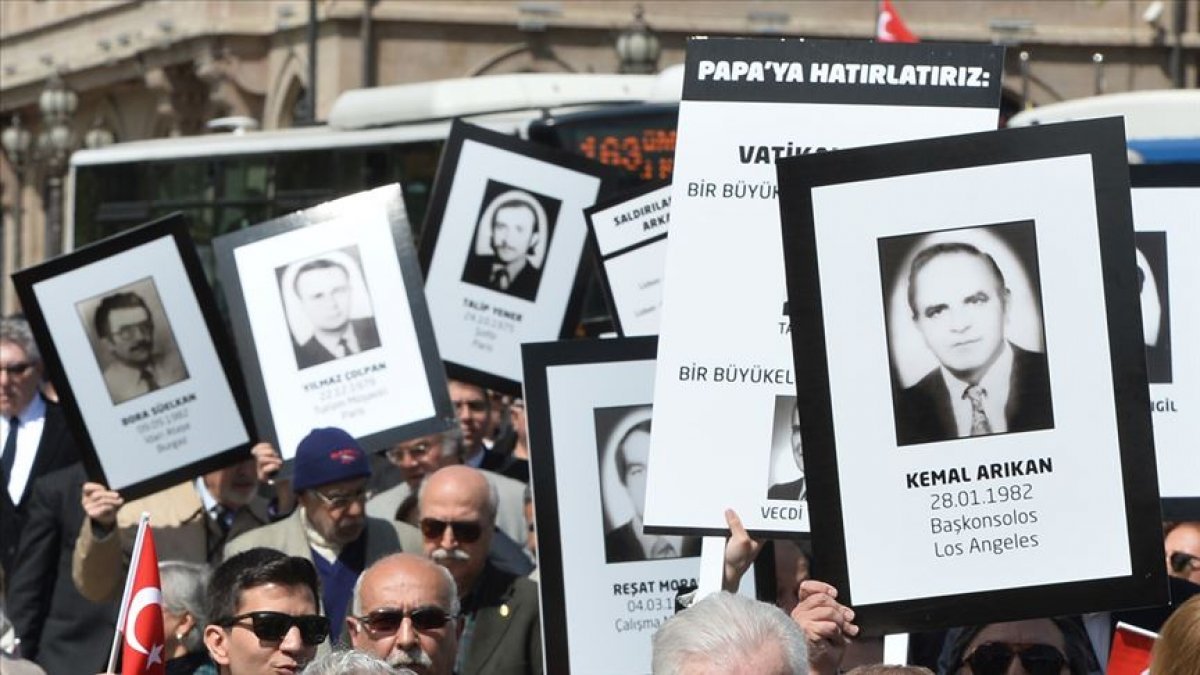 The vast majority of the attacks were conducted by the Armenian Secret Army for the Liberation of Armenia (ASALA) and the Justice Commandos of the Armenian Genocide (JCAG).

ASALA, founded in 1975, was the first Armenian terrorist organization to wage war against Turkey.

It targeted not only Turkey but also other countries and became infamous for a bomb attack on the Beirut office of the World Council of Churches in 1975.

The JCAG was formed in 1975 in Beirut. However, it is nationalistic, not Marxist-Leninist like ASALA. 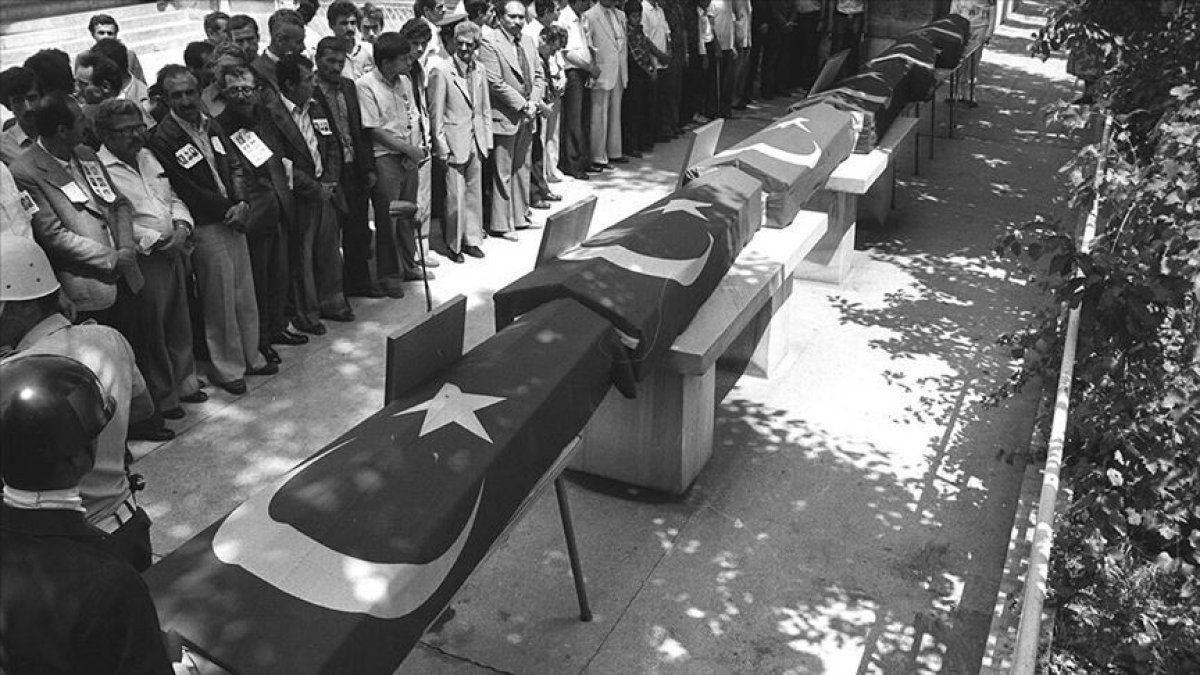 A funeral ceremony was held for the police and civilians who were martyred in an attack by Armenian terrorists on the Esenboğa Airport in capital Ankara. (1982)

Claiming that it only received support from the Armenia diaspora rather than foreign partners, JCAG only targeted Turkey because it believed that attacking other countries would damage the so-called "Armenian struggle."

It initially gained notoriety by claiming responsibility with ASALA for an attack on Turkey's Ambassador in Vienna Danis Tunaligil on Oct. 22, 1975.