Turkey on Monday marked 67 years of NATO membership, saying: "The principles of solidarity and collective security epitomized by NATO have become more important than ever."

In a statement, the Foreign Ministry said NATO "constitutes the main axis of our defense and security policies."

"NATO PRINCIPLES HAVE BECOME MORE IMPORTANT THAN EVER"

"For 67 years, in line with the responsibilities and liabilities arising from being a NATO Ally, our country has successfully protected NATO’s borders and upheld the Alliance’s values and principles," the ministry said, adding that NATO membership also contributes significantly to Turkey's security. The ministry underlined Turkey's strategic and unique place within the alliance. "Turkey actively participates in NATO’s decision-making procedures; makes significant contributions to NATO’s ability to respond to emerging challenges by its adaptation skills to fast-changing dynamics; assumes critical responsibilities in NATO-led missions and operations; and works towards the enhancement of partnerships. 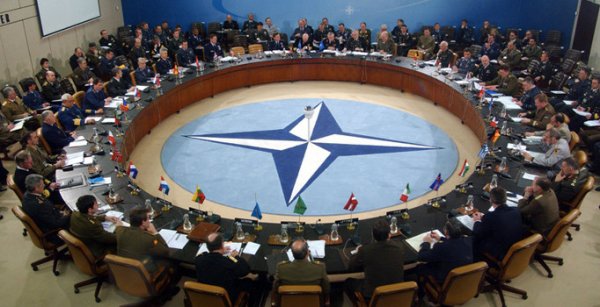 "Today, as security challenges multiply, diversify, and gain hybrid characteristics, it is clear that the principles of solidarity and collective security epitomized by NATO have become more important than ever." The ministry said among various risks and threats, in particular, the fight against terrorism is "imperative" as terrorists threaten not only Turkey but the alliance, and the stability of the Euro-Atlantic region as a whole.

The ministry vowed to continue to work with its allies to ensure that "NATO plays its part in this context."