Trump: I am watching closely

Trump said Turkey has been planning to launch an operation against the YPG terror group, the Syrian offshoot of the PKK, for a long time.

US President Donald Trump said Thursday he is talking to "both sides" as Turkey carries out its ongoing Operation Peace Spring in northern Syria.

"TALKING TO BOTH SIDES"

"They have been fighting forever," Trump said on Twitter. "We have no soldiers or Military anywhere near the attack area. I am trying to end the ENDLESS WARS. Talking to both sides."

"Turkey is a member of NATO. Others say STAY OUT, let the Kurds fight their own battles (even with our financial help)," the president added, reiterating warnings of economic repercussions for Turkey if it acts in a way he deems unwarranted. 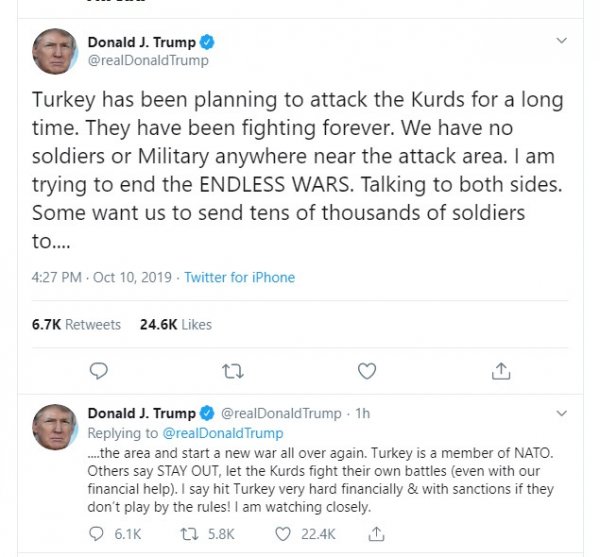 Trump announced Sunday the pullback of US forces ahead of the start of the Operation Peace Spring, a move that has drawn stiff resistance from Capitol Hill.