Rescue services and witnesses say the Assad regime forces have left many towns in ruins and knocked out dozens of medical centers.

The United Nations said 235,000 civilians had fled their homes in rebel-held northwestern Syria during regime air strikes and shelling this month.

The U.N. Office for the Coordination of Humanitarian Affairs (OCHA) said the exodus had taken place between Dec. 12 and 25.

"SYRIANS ARE SUFFERING FROM THE DEVASTATING CONSEQUENCES"

Most people had fled the city of Maarat al-Numan, towns and villages in southern Idlib province, Idlib city, and camps along the Syrian-Turkish border, OCHA said. “With the latest escalation of violence in northwest Syria, civilians in Idlib governorate are again suffering from the devastating consequences of hostilities,” it said. 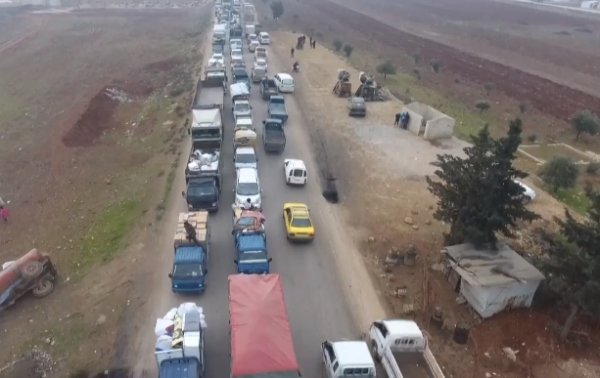 OCHA said Maarat al-Numan and the surrounding countryside “are reportedly almost empty”. Thousands of families were also reported to be too frightened to move, fearing air strikes and shelling.

President Erdoğan had earlier said that Turkey cannot handle a fresh wave of migrants from Syria, warning that Europe will feel the impact of such an influx if the bombing is not stopped.