President Erdogan says 2021 to be year of reforms in country

Turkish president underlines they will work day and night to raise reputation of country.

The president of Turkey spoke at two opening ceremonies in Turkey Saturday, proclaiming that 2021 would be a "year of democratic and economic reforms" in the country.

Connecting via live video link from the Vahdettin mansion in Istanbul to the first event in the capital Ankara, Recep Tayyip Erdogan welcomed the countruction of a road segment in the Golbasi district.

"We'll continue to work day and night in the belief that the greatest honor, the greatest share, the greatest politics is to earn work for our nation, to serve, to raise the reputation of our country," said Erdogan after the completion of the project worth 352 million Turkish liras (about $46 million).

"TURKEY WILL GET WHAT IT DESERVES"

"In essence, the world is going through a process in which the health crisis that began with the coronavirus epidemic has evolved into increasingly deep economic and political shocks. Turkey has been caught up in this historic transformation at a time when it's developed in terms of infrastructure, is politically strong, prepared economy-wise and active both on the field and at the [negotiation] table."

He also added that "Turkey will surely get what it deserves politically and economically in the new global architecture. We make all our accounts, all our investments, all our projects accordingly." 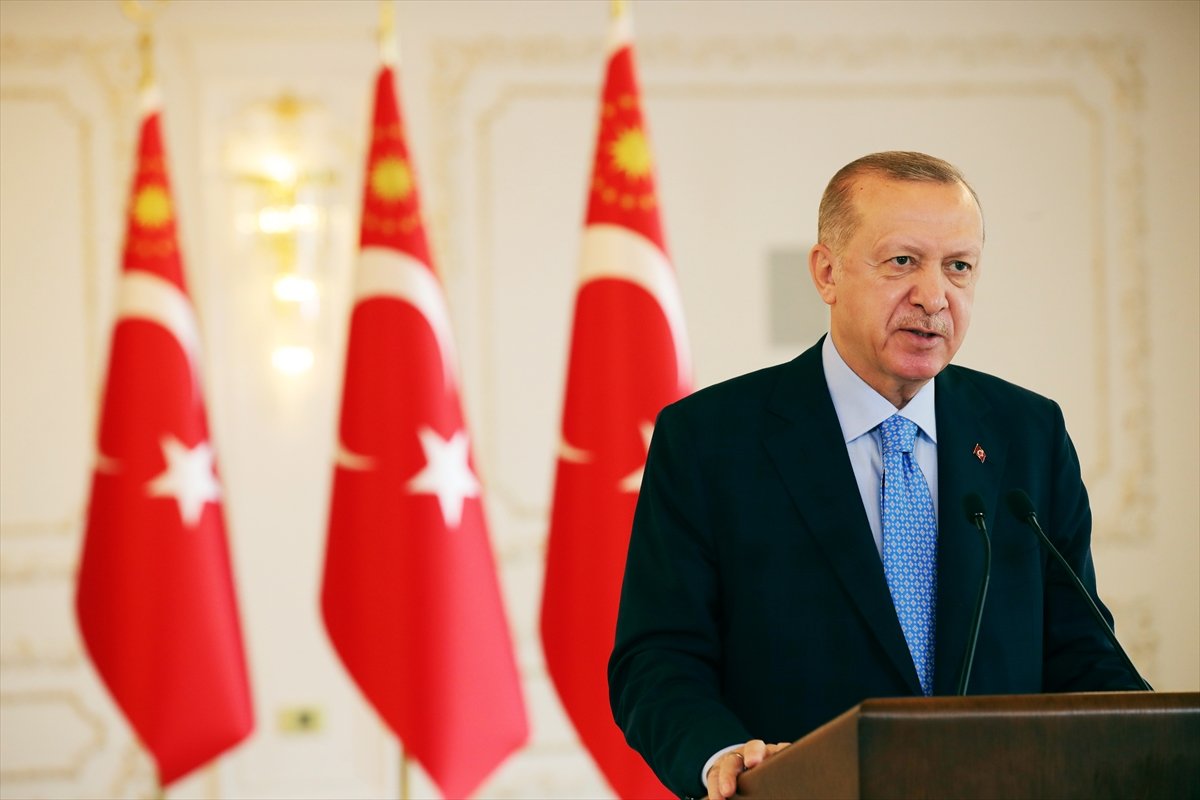 "WE ARE READY TO TALK WITH EVERYONE"

Erdogan, who stated that every development in the region and the world confirmed and strengthened Turkey's power and importance, said: "Our hearts and arms are open to anyone who wants to walk this path with us in the light of these truths."

"We don't have any special problem that can't be resolved -- not with Europe, America, Russia, China, or other countries in our region. We are ready to meet, talk, negotiate and act together with everyone, provided that our sovereignty, rights, law and potential are respected," he emphasized.

Erdogan, who stated that they continue reforms in accordance with these goals concluded his words: "I hope that 2021 will be the year of democratic and economic reforms, as we promised our nation.

"We'll present the preparations for this to the discretion of our nation and parliament as soon as possible."

"We're making democratic reforms not because anyone forces us, but because every member of our nation is worthy of them. With this understanding, we'll quickly execute [reform] packages for which we've completed preparations and swiftly complete fresh efforts.

In a second opening ceremony marking the opening of a lithium carbonate production plant in the neighboring Eskisehir province, Erdogan said the lithium produced at the plant is projected to be used in components in Turkey's first domestically manufactured electric car under the stewardship of the country's Automobile Joint Venture Group (TOGG).

Hailing the Etimaden Lithium Carbonate Production Plant in central Turkey, Erdogan underlined that new investments from transportation to culture and art, agriculture and the defense industry were being opened in the counrtry every day, even as other economies have come to a standstill.

He said 2020 had been a fruitful year for Turkey, especially in the field of energy, adding: "We're trying to bring not only hydrocarbon resources to our economy, but also other natural and underground riches in our country. We're working hard to uncover Turkey's true potential in this strategic area, which has been neglected for years before us."

He stressed that in the last four years alone, a record 4.4 million meters of drilling had been carried out.

"In particular, we pay special attention to the boron mineral, which is one of the most strategic underground resources of our country. For example, our production of refined boron products, which was 436,000 tons in 2002, has reached about 1.6 million tons as of December this year," said Erdogan.

Noting that 73% of all global boron reserves were in Turkey, he added that in the coming period, these would reduce Turkey's dependence on foreign energy resources and raw materials.