Over 1 ton of endangered scales seized in Istanbul Airport

Over a ton of scales from the endangered pangolin species were seized on Monday at Istanbul Airport, according to officials.

Customs officers coordinated with Turkey's Agriculture and Forestry Ministry over a suspicious package, the Trade Ministry said in a statement.

ESTIMATED WORTH IS $1.5 MILLION

The package was found to contain 1,217 tons of scales belonging to the pangolin, also known as the scaly anteater, whose trade is prohibited under international conventions, added the statement. 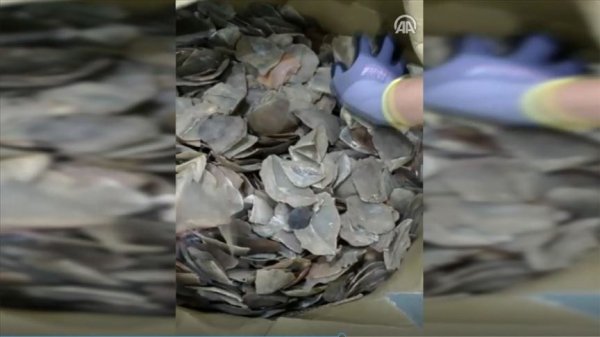 The scales have an estimated worth of 8.5 million Turkish liras (nearly $1.5 million) or up to $3 million in Asian countries where some believe them to have healing qualities.

Over 1 ton of endangered scales seized in Istanbul Airport WATCH

According to International Union for Conservation of Nature (IUCN) figures, nearly 1 million pangolins were used in illegal trade in 2000-2016.